MANITOWANING – The popular Haunted Ride and Pumpkin Festival are coming back to Assiginack this Saturday and Sunday respectively, boasting new events for 2019 that are sure to bring fun and excitement for all ages.

“We’d like to encourage residents and visitors to get out and participate and have a nice time in the town,” said Assiginack Township events co-ordinator Jackie White.

The Haunted Ride takes place on Saturday evening, October 19, from 7 to 9 pm and consists of a hayride following a spooky all-new route, beginning at the Assiginack Arena on Vankoughnet St. in Manitowaning.

The event has been so popular in past years that the amount of vehicles could not keep up with demand and there were long lines of eager riders at the arena. A fourth haywagon has been added for this year and it is expected to keep the operation flowing even more smoothly.

Ms. White declined to spoil any details of the scariness to come but said there were very unique offerings available this year. Admission to the ride is just $2 to help cover operating costs, though most people on the scare floor are dedicated returning volunteers.

The next day, Sunday, October 20, the Assiginack Fairgrounds next to the arena are the host of the annual Pumpkin Festival which gets underway at noon.

New for this year, Parry Sound ventriloquist Mark Crocker will be opening the event at noon with an hour-long show of the finest segments from his family-friendly act.

During the day there will be a number of craft vendors set up, refreshments available from Manitowaning Minor Hockey and, of course, a wide variety of contests to enter.

In the culinary and crafting category, the bagel bake-off for kids returns alongside the pumpkin loaf contest. The bagel category features two age divisions: 8 and under and 9 and above. First and second prize in each division is worth $30 and $25, respectively.

The prizes are the same for the pumpkin loaf contest but the age divisions are split between 17 and under and 18 and above.

Onto the crowd-favourite feats of strength, the seed spitting contest with a $10 prize returns this year alongside other activities such as pumpkin bowling and hoop golf—a new addition for 2019.

Then, the hay bale throwing competition takes place and features a 16 and under division as well as an adult category. The top place finisher in each division will go home with $30 and a winning excuse to get out of chores by taking a hot bath to soothe their backs.

Not to be forgotten, the pumpkin catapult competition begins at 1:30 and boasts an impressive $500 prize for the grand champion. There will be two extra prizes of $100 each for the team who can demonstrate the most spirit, as well as a team that experiences a catastrophic failure of their machine.

Thanks to a dedicated team of volunteers and sponsor partners such as the Ontario Clean Water Agency, the Pumpkin Festival is offered free of charge to all those who wish to take part. 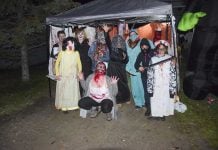 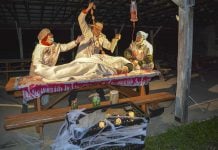 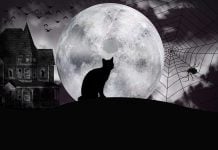 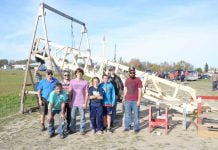 Mark your calendars for the Assiginack Haunted Ride and Pumpkin Festival 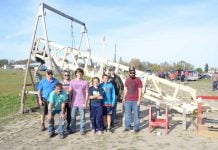 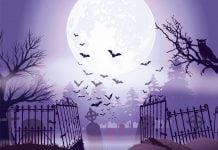