MANITOWANING—If it’s something Assiginack has in spades, it’s got to be community spirit. Hot after their 2018 Harvest Glory Days win the community came together to pull off the municipality-sponsored Haunted Ride and Pumpkin Festival with great representation of the Halloween spirit.

On Saturday night, October 20, 400 people flocked to the Manitowaning Arena to brave the bitter cold and take a 45-minute hay wagon ride around the community. Terrifying scenes and intimidating monsters greeted the brave souls who dared to take the trip around Manitowaning.

The ride included a 10-minute stop at the Debajehmujig Storytellers for a spooky tale and a cup of hot chocolate and freshly-made scone.

On Sunday Assiginack hosted its annual Pumpkin Festival with fun and games for the whole family, culminating in everyone’s favourite event, the pumpkin catapult.

In the hay bale toss (kids and adults tried their hand at tossing a hay bale to clear a set height, like high jump), Michael Quackenbush easily cleared six hay bales stacked on top of a hay wagon. No other challenger came close. In the kids’ category Dennis Gulyas was named hay bale toss champion.

Children lined the tennis courts to see who could spit their pumpkin seed the farthest with this illustrious honour going to Jon Mende in the age nine and up category and Sebastian Mara in the 8 and under division.

There were three entries in the much-anticipated pumpkin catapult contest: the Quackenbush brothers, Delbert Sousa and family and last year’s returning champion Dave Eade and friends.

Mr. Eade told The Expositor that he had spent 30 hours a week since the beginning of September designing and working on his catapult. It was a thing of beauty but, alas, after a last-minute malfunction, failed to fire. Mr. Eade and his friends were gifted with the Total Catastrophe Award, but it would seem Mr. Eade might have a head start on next year’s competition.

The Quackenbush boys’ contraption, composed of old garage door springs, had a sure shot every time, but it was former champion Mr. Sousa who launched his pumpkins the farthest and took first place honours. Mr. Sousa and his family have entered all four years of the catapult contest, placing first the first year, third the second year, “last year was a total bust,” and coming full circle in 2018 to win again thanks to a lighter counterweight than in 2017. 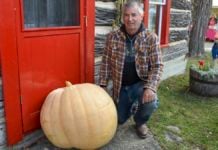 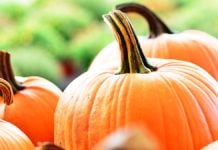 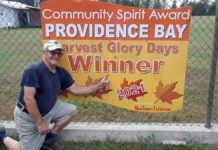