SHEGUIANDAH—It’s that time of year again in Sheguiandah—the creek is flowing, pickerel are spawning and children from almost all of Manitoulin’s public schools descend on the Little Current Fish and Game Club’s (LCFGC) pickerel hatchery.

The hatchery, located close to the home of Bill and Linda Strain on Sheguiandah Bay, has played host to Grade 4 children for a number of years and this year was the first for students from the Pontiac School in Wikwemikong to visit and see the process.

Mr. Strain, president of the LCFGC, noted that this year his club welcomed over 140 students to the hatchery and will be handing out complimentary fishing rods for everyone.

Last Monday brought with it weather the likes of which the LCFGC had never seen during its hatchery days with snow and cold winds rolling in off the bay but by Wednesday, the weather had warmed and the snow melted.

The below average temperatures have not been good for the annual pickerel spawn, however, with the water temperature only averaging 3°C—below the needed 7°. Pickerel rely on both an increase in daylight hours and water temperature to spawn and Mr. Strain noted that the cooler water temperatures have meant, so far, a below average spawn. Each year, club members capture both males and females coming into the creek in a hoop net, harvest eggs from the female, sperm from the male to fertilize the eggs, then letting the fertilized eggs mature in the hatchery before releasing them into the creek once they reach the eyed-egg stage of development.

Students touring the hatchery saw approximately 200,000 eggs instead of the usual 900,000.

“The last few years have been phenomenal,” the president said of the previous harvests.

The Pontiac School children impressed the LCFGC volunteers with their attentiveness, good questions and willingness to learn about the future of the fish population.

Mr. Strain thanked the many volunteer members who make the yearly tour possible as well as his wife Linda, Gail Gjos for baking treats for LCFGC members and Christina Jones for manning the treat station.

The LCFGC is celebrating its 50th anniversary this year, marking the occasion with a special gala dinner at the Northeast Town recreation centre on Saturday, June 11. Tickets are available from members. 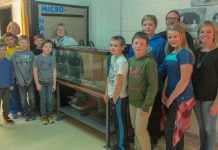 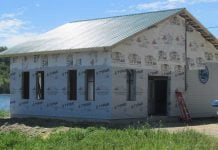