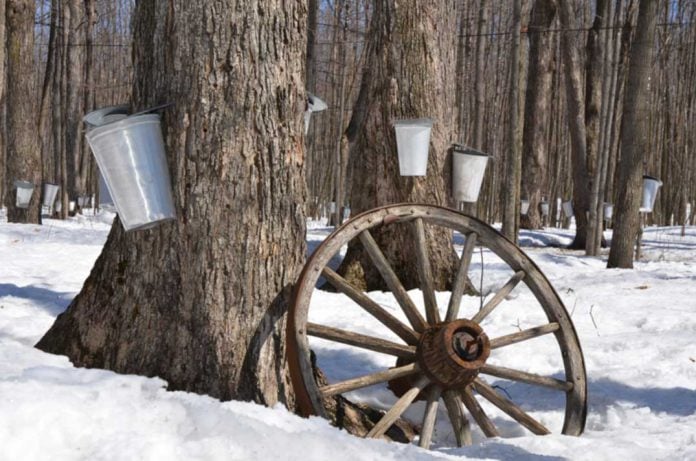 MANITOULIN—The sweetest time of the year is just around the corner as Islanders prepare to tap their trees in the coming weeks, but the Ontario Ministry of Agriculture, Food and Rural Affairs (OMAFRA) warns that extra care is needed when tapping trees this year due to stress put on maples by last summer’s drought.

“Last year’s drought put stress on woodlots and forests,” explained Todd Leuty with OMAFRA’s orchard horticulture and forestry division. “Maple trees react to droughts by not producing as much starch and sugar.”

Mr. Leuty added that because of the drought the trees will be storing less sugar for use in leafing out in the spring of 2017.

“Some producers choose not to tap trees after droughts, or just not to tap trees on higher ground in the sugar bush that would have been more affected,” said Mr. Leuty. “Care should be taken when tapping the trees, such as limiting one tap per tree, thereby leaving more energy in the tree.”

He added that some producers in southern Ontario might not be tapping at all this year due to trees that were doubly stressed by both the drought and by excessive defoliation from an eastern tent caterpillar larvae or gypsy moth larvae population upsurge.

“Remember not to drill tap holes or install spiles while tree trunks are frozen below -5° Celsius,” recommends Mr. Leuty. “Tapping into deeply frozen wood can cause the bark to split above and below the hole as the spile is seated into the hole.  With splitting, vacuum in sap tubing can be reduced due to a poor spile-to-tree seal, and sap can leak down the trunk instead of into the spile. Drill tap holes 1.5 inches deep, at a slight upward angle using a sharp sanitized tapping bit. A downward sloped tap hole will drain by gravity to prevent sap or rain water from collecting in the hole after sap harvest has ended.”

As for how the drought will affect the sap volume for 2017, Mr. Leuty said it’s too early to tell.

“You just can’t predict what the sap volume will be,” said Mr. Leuty. “It depends a lot on the weather—the freeze/thaw that makes the sap flow.”

Mr. Leuty said that syrup producers in some areas of southern Ontario are three weeks ahead of Manitoulin and have already been tapping trees.

In his March 2 Ontario Maple Syrup Production Report, Mr. Leuty says that so far the 2017 maple syrup crop is reported to be of very fine quality with rich maple flavour.

“Syrup producers in early southwest regions report 50 to 75 percent of a syrup crop has been processed so far with more fresh sap to come,” said Mr. Leuty. “Mid-season areas report a 10 to 25 percent syrup crop so far.”

He also reported that in Northern areas, deep snow has made tap installation difficult for many syrup producers. “A few have just completed tapping, while others are waiting until temperatures warm above negative 5° Celsius to allow tapping activities to continue,” he shared.

The short term flow forecast for Northern Ontario reads, “Snow covered areas in Northern Ontario should help keep trees in the sugar bush cold to help hold back bud development if a warming period occurs. Maple syrup producers in the Thunder Bay area can expect sap flow the middle of next week.”