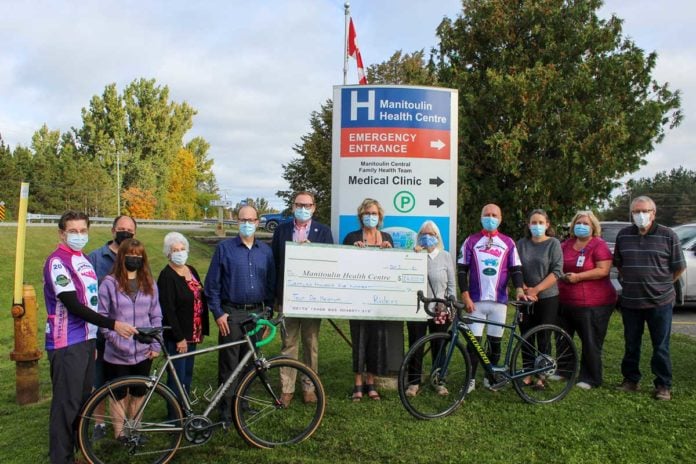 MINDEMOYA – The annual Tour de Meldrum ride celebrated its 20th anniversary recently, and the individual who initiated the annual ride, Dale Scott, had set a fundraising goal of $20,000 to give towards the Manitoulin Health Centre (MHC) campaign for expansion and renovations of the Mindemoya Hospital emergency department.  Not only was this goal reached, but it was also exceeded.

Mr. Scott and several other riders (among the 32 who took part in this year’s ride), businesses and others who donated presented a cheque in the amount of $26,500 to MHC officials last week.

“Thank you, riders, and everyone who contributed to support the hospital,” stated Paula Fields, co-chief executive officer of the MHC who also participated in the ride along with fellow co-CEO Tim Vine.

Mr. Scott explained, “we received donations from almost all the Island municipalities, several companies and corporations, businesses, private and individual donations. The donations were amazing this year.

And I would like to thank every one of you riders for taking part,” stated Mr. Scott.

Dr. Robert Hamilton, who was one of the riders said at the cheque presentation, “and thank you very much to you, Dale. You have put on this ride for 20 years. “Cycling is one of your passions, but a second passion you have demonstrated is for fundraising and service to your community with your former business (veterinarian medicine) to your community with your work with service clubs, and your support of your church, and as a municipal councillor.”

“I know one of your other passions is your family,” stated Dr. Hamilton. “And you have roped in members of your family to take part and help in the ride. Thank you to your wife Holly, your daughters and sons-in-law, and now your grandchildren who participate.”

Judy Mackenzie, president of the Mindemoya Hospital Auxiliary said, “congratulations to Dale Scott and company for such a great accomplishment. The hospital has benefitted for many years from the Ride to Meldrum, but this year is certainly special. You have hit a milestone!”

Ms. Fields noted several of the MHC employees have indicated they would like to join in on the Tour de Meldrum in 2022. As a participant in the ride this year she said, “it was such a nice ride. And what made it extra special is that (the experienced riders) kept circling back (on the route) around and checking on the rest of us riders, and there was music playing along the way. It was really fun.”

“I would like to thank Dale for how smoothly the event went,” stated Mr. Vine. “The event ran like a fine Swiss watch. This donation is a big boost to our fundraising campaign as it gets closer to our goal. There are still funds to raise but we are very grateful to the support we are receiving from the community. It demonstrates how important the hospital is in the community, how big of an impact it has on the community and how the excellent care provided at the hospital is appreciated. A very big thank you to Dale and the organizers and a thank you to the entire Island community for being so generous.”