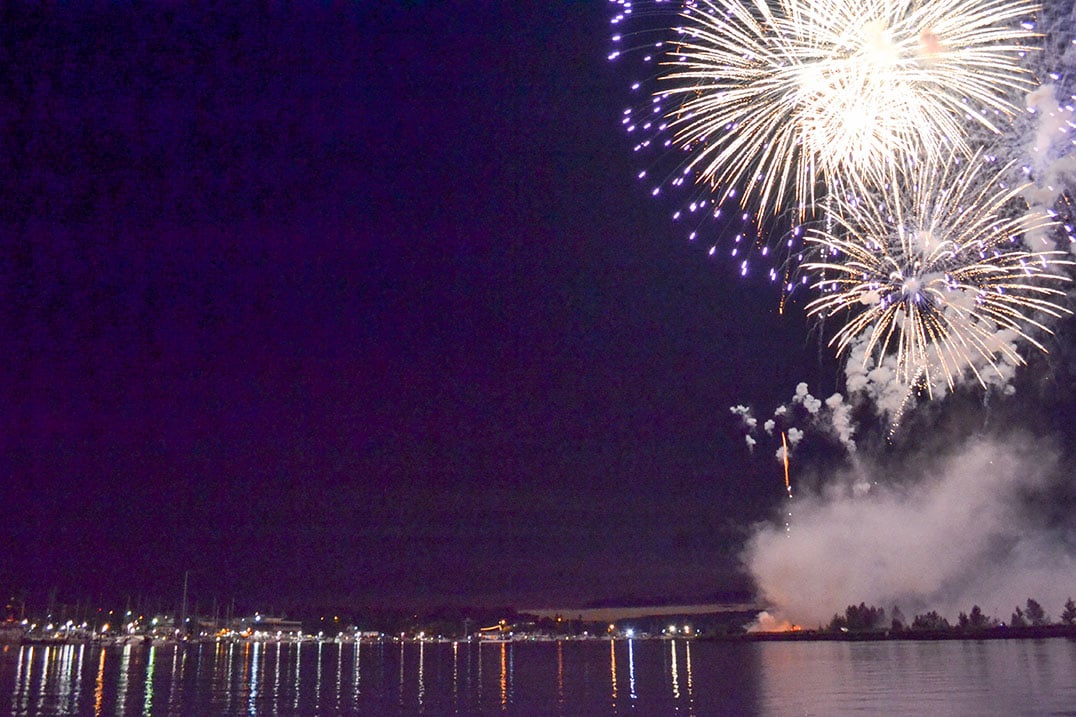 LITTLE CURRENT— It was another amazing Haweater Weekend for the Little Current Lions Club despite showers on Sunday afternoon. The 48th year for the event was marked with an amazing fireworks show, a two-day downtown street fair filled with visiting vendors and local business booths and a packed marina and docks.

“It was a fantastic weekend,” Little Current Lions Club President Bruce Burnett told The Expositor. “We were so glad that we were able to close down the main street for both Saturday and Sunday. It worked out well and the downtown was busy with the car show, booths, activities and entertainers.”

“The baseball tournament was also really busy and they were really awesome playing through the rain on Sunday,” continued Mr. Burnett. “We had another fantastic Miss Manitoulin pageant for the third year in a row featuring six great contestants. Miss Manitoulin 2015 Brittany Manitowabi was a welcome presence throughout the weekend and even sang O Canada at our opening ceremonies.”

For the first time in over 20 years the Haweater parade was cancelled, which Mr. Burnett said was a huge disappointment, “but thankfully the weather cleared in time for the fireworks and we had a great turn out,” he added. “We were also disappointed with the low numbers at Hawfest. We can’t afford to go down anymore next year. We will have to start figuring out what we are going to do next year this fall as a Haweater Committee.”

“It was a great weekend and we are so proud of the hard work of all the volunteers that made the event possible,” he concluded.

Haweater Weekend 2015 kicked off with the Miss Manitoulin pageant at the Manitoulin Hotel and Conference Centre on Thursday night. Six ladies from across Manitoulin competed for the title including Brittany Manitowabi, April Torkopoulos, Sarah Bayer, Delaney Madore, Megan Misner and Kieran Harper-Hogge.

The girls went through a multi-tiered process to determine who would be crowned the next Miss Manitoulin, including one-on-one interviews prior to the pageant with the judges, a fashion show featuring Island fashions, an evening gown competition, and a talent or speech component.

In the end, 19-year-old Brittany Manitowabi from Wikwemikong was crowned Miss Manitoulin 2015.

The opening ceremonies on Friday night were started with the singing of O Canada by the newly crowed Miss Manitoulin, followed by opening remarks by Mr. Burnett and Northeast Town Mayor Al MacNevin with introductions from MC Lion Marcel Gauthier. Federal Liberal Candidate Heather Wilson was also on hand to offer her congratulations to the Lions noting their many community projects. 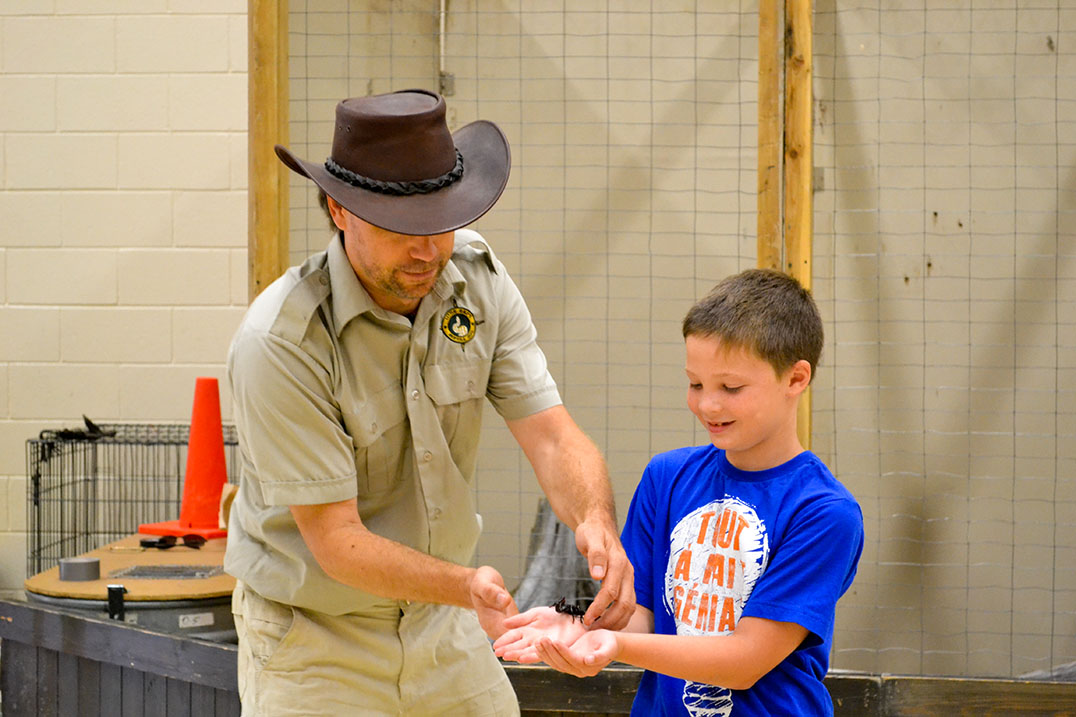 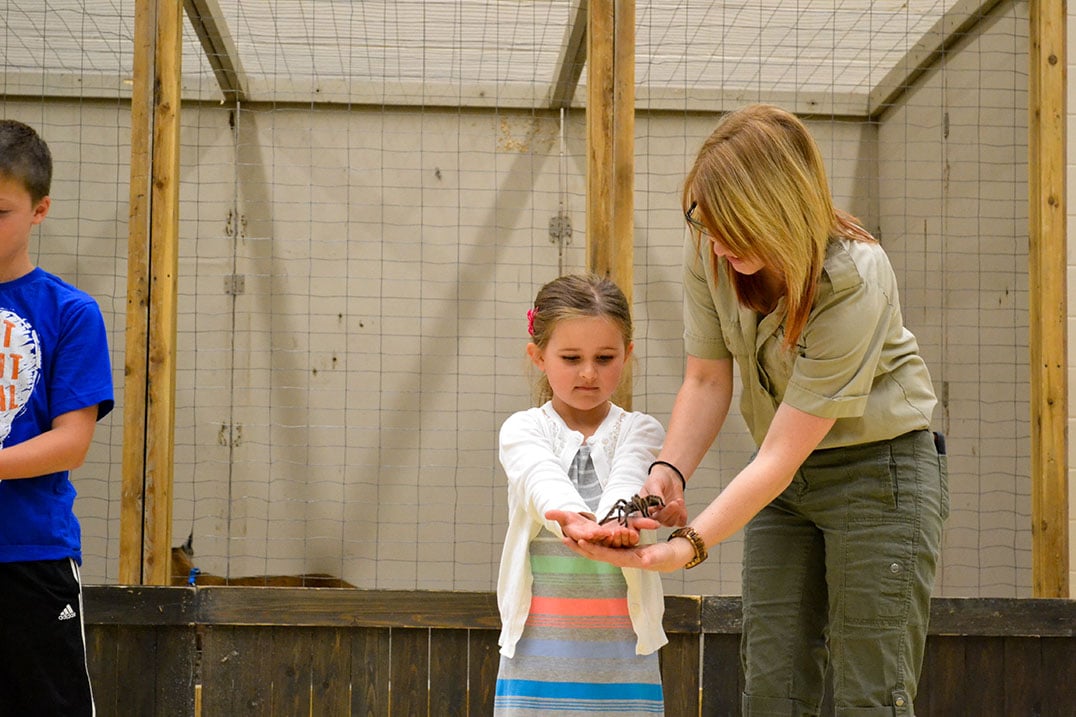 “Every year Haweater Weekend just keeps getting better and better,” said Mr. Burnett, “and we keep finding more members to join. In the past year we have had 10 new members, which is great considering two years ago we were down to 14 members. Having all the new members sure makes things easier and we are thankful, especially this weekend. We are also thankful for all the volunteers that help this weekend. We really try to create a family focused weekend with an array of events this year that will make everyone happy. As for the fireworks, I’ve been promised that they will be even bigger and better then last year with booms so big they will hear them in Killarney. Thank you to all the sponsors for their encouragement and support and we wish you all a safe and happy Haweater.”

“Thank you to the Lions for letting me say a few words and for putting together this amazing weekend,” said Mayor MacNevin. “The Lions deserve a lot of credit for the effort they put forth each year making this weekend better and better. It is a great weekend for the whole family and a wonderful event to showcase everything our community has to offer.”

In addition to the MuchMusic teen dance on Friday night, Legion dance and 4-on-4 Ball Haw-Key Tournament, there was live music at the downtown Cenotaph from The Uppers and at Low Island Pavilion by Evan Farquhar and Damien Thibodeau.

The Haw-Key Tournament saw seven teams complete with the Minions winning the 5-8 division and Team Marshall winning the 9-13 division. The Pirates were awarded the Most Spirited Award. 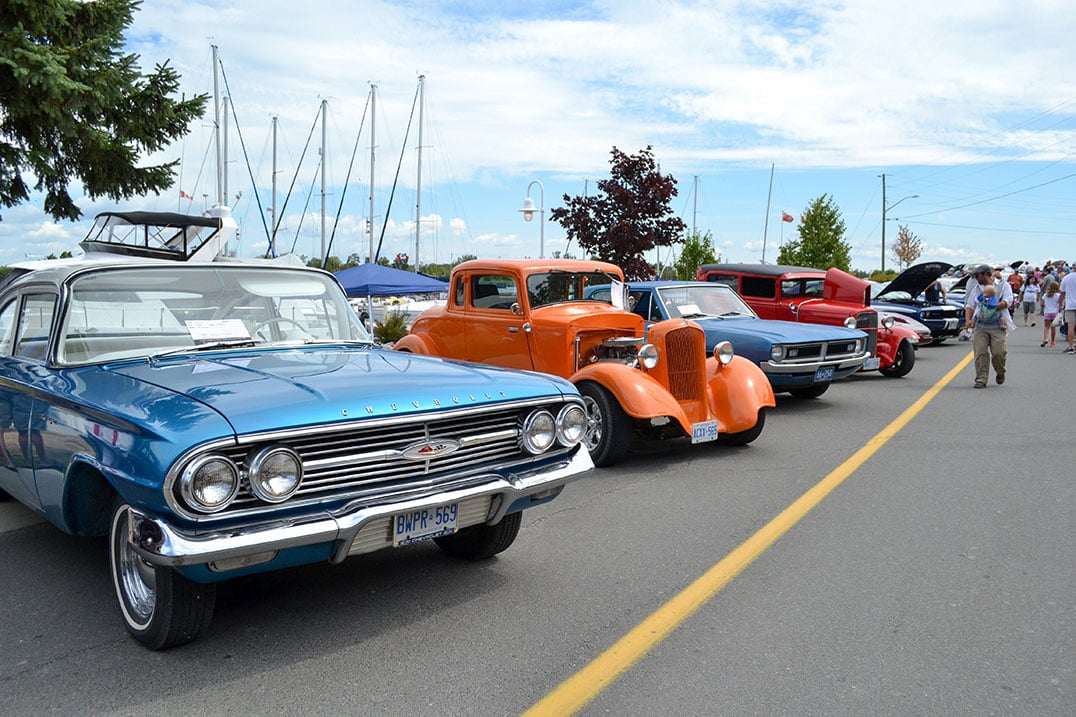 The 22nd annual mixed slow-pitch tournament also started on Friday night and continued throughout the weekend.

In the A division Pitch Slap took the championships, while Moore’s Towing won the B division and Dirty Ball Bags dominated the C division.

Little Ray’s Reptile Show brought out huge numbers throughout the various weekend shows at Little Current Public School, while kids had the opportunity to see and hold both exotic animals from around the world and various North American species. Throughout the show youth also learned about the threats to Canadian wildlife and what they can do to help.

NBS Auto Hot Wheels Racing was once again a Haweater Weekend favouite, bringing out tons of participants. Abbie Heins won the Super Pro and Cord Hughson, the runner up Super Pro. Holden Brock won Semi Pro, while Wyatt Swartz was runner up in Semi Pro. Brian Garinger was the race official. The Street Eliminator winner was Hailey Draper and Kegan Bowerman was named the runner up Street Eliminator. Brett Mastelko was the winner of the signed Tony Diodati Super Pro picture. This is the third trip to the winner’s circle for Abbie Heins and the second time to the winner’s circle for Holden Brock. All competitors were treated to ice cream and prizes, while the winner received hardware from ENEX Engraving of Sheguiandah.

The 13th annual Haweater Cruise In was also a huge success on Saturday with close to 100 classics and hot rods beautifully displayed along Little Current’s waterfront. 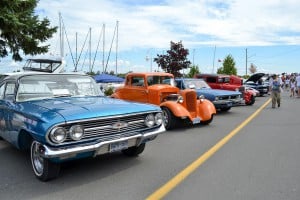 The Favourite Modern Production went to Norm Marcil from Chelmsford for his 2004 Corvette, the Favourite Truck was awarded to Robert Cryer from Timmins for his 1931 Ford Model A, the Favourite Modified went to Kagawong’s Donna Noble’s 1968 Camero, Favorite Classic to Leslie Stoneypoint’s 1974 MG Midget, the Mayor’s Choice Award was given to Larry Brunke’s 1930 Ford Model A from Bruce Mines, the Kids Choice Award went to Patrick Madahbee from Aundeck Omni Kaning’s 1952 Ford truck and the BIA Choice Award went to Ken Fogg from Gore Bay’s 1937 Ford Coupe. Close to $2,000 was raised for the Manitoulin Centennial Manor and a large amount of non-perishable food collected the food bank.

Eleven boats raced across two divisions this year, with racers doing their best against a strong westerly wind.

Ten teams competed in the beach volleyball tournament at Low Island Park. The Jaguars from southern Ontario were the tournament champions.

Cindy Cook from TVO’s Polka Dot Door, Ashlee Manitowabi and Bella the Clown were popular children’s entertainers throughout the weekend, as were face-painting clowns downtown and at Low Island Park.

Both the horse pull at the newly painted Northeast Town horse ring (thanks to the Manitoulin Horse Club) and Haw Horse Show/Trail Class Challenge brought lots of visitors to the Northeast Town Recreation Centre.

The first prize winner of the quilt raffle was Carol Farrar of Clarksbury, while the second prize winner was Brenda Monaghan of Whitefish Falls.

Also up at the recreation centre was the euchre tournament Sunday afternoon. The winners were Betty Gammie, Eva Bond, Ruth McGregor and Barb Lawrence.

The wonderful fun filled weekend was capped off with what many called the biggest and best yet mammoth fireworks display ever.