HIGHWAY 6 – Drivers on Highway 6 will likely have noticed two new billboard installations reminding travellers that ‘sex trafficking is here, but so are we.’

The billboards complement the joint effort of Noojmowin Teg Health Centre and Manitoulin Northshore Victims Services and their social media and newspaper ad campaign, highlighting their partnerships with the Ontario Provincial Police, United Chiefs and Councils of Manitoulin Anishnaabe Police and Wikwemikong Tribal Police Services as well as with the Province of Ontario, specifically the Ministry of the Attorney General.

Delaney Campbell, a sexual and domestic violence service program counsellor with Noojmowin Teg, said the campaign reminds people to be vigilant for signs that someone may be being trafficked while also reminding those who may find themselves a victim that they are not alone and supports are available.

The information Noojmowin Teg and its partners are receiving is that human trafficking is occurring on Manitoulin and, Ms. Campbell added, similar to reports for domestic and sexual assault, the actual number is usually far greater as it is also underreported.

What human trafficking looks like on Manitoulin is hard to pinpoint as it is impossible to make generalizations, the counsellor added, noting that preconceived notions about the appearance of victims and those who are trafficking them are dangerous. It can take on many different forms, she said.

The billboards and ad campaign also include a toll-free number to the national hotline, 1-833-900-1010. Those on the other end of the line will then connect you to services close to home, Ms. Campbell explained.

If you or someone you know is at risk of human trafficking, please contact the national hotline noted above and/or Manitoulin Northshore Victims Services at 1-866-392-7733 or call 9-1-1. 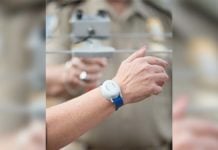 Victim Services will be lead admin for Project Lifesaver