“The two day conference went really well,” Mark Forsy, Alternative Program Worker with M’Nendomowin Health Services, told The Expositor. “We had 170 people the first day for the keynote address, and 80 the second day for the workshops.”

“This is the first year for the conference, but we have hosted knowledge symposiums in the past,” continued Mr. Forsythe. “We had feedback in the past that clientele would like us to bring in a speaker they could relate to more. In addition to Mr. Roberts, we also had local speakers who talked about their battle with addictions. It was very inspiring.”

The conference was open to Islanders, clinicians, elders or anyone wishing to attend.

Following a continental breakfast and registration on Wednesday morning, the conference got underway with an opening prayer and smudge.

During his keynote address, Joe Roberts shared his life story and how he went from ‘Skid Row to CEO.’

After running away from home Mr. Roberts found himself living under a bridge as a homeless drug addict in Vancouver. He was able to overcome addiction and today is a best selling author, CEO and internationally sought after professional speaker who motivates and inspires audiences worldwide.

Mr. Roberts shared his powerful life story and how he was able to find faith and pull himself out of the gutter.

He also spoke of his campaign, the Push for Change, pushing a shopping cart across Canada to raise awareness and funds towards ending youth homelessness.

“I believe in investing in the possibilities of young people,” said Mr. Roberts. “When I was training for this walk recently, I picked up a scratched penny and held it in may hand. I thought regardless if this penny has been outside a month or two and is tarnished, it still holds the same value as the day if was minted, even though it my look different.”

Kelly Cooper of Wikwemikong was one of the two Island speakers who shared his story.

He started by asking for a moment of silence for those that fought and lost their battle with addictions.

“I’ve lost a lot of good friends because of addiction and it could have been me,” said Mr. Cooper. “Change starts with a choice. Opiates are very addictive and you begin to lie to your loved ones—put addiction ahead of your family. Support is golden and throughout it all my wife stayed with me. I joined the methadone program and used it the proper way and it was able to help me.”

“I worked by way down and it took two years, but I was able to make the program work for me and get off opiates,” continued Mr. Cooper. “I overcame addiction and I walked away as proof that change is possible.” 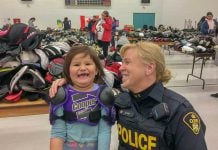