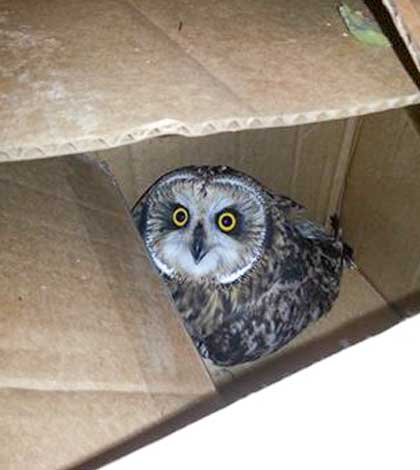 LITTLE CURRENT—A tiny baby short eared owl crouched bewildered and hungry, huddled in the middle of Vankoughnet Street in Little Current when fate and a caring community of bus drivers came to its timely rescue.

Sue McKenzie, who works in the AJ Busline offices in Little Current, and often comes to the rescue of Island dogs who need some fostering before finding new caring homes, spotted what she thought might be a chunk of concrete in her headlights as she came to work early one late October morning.

“It was on Vankoughnet Street when I came to work in the morning. I thought it was a piece of concrete or something on the road that one of the buses might hit so I stopped, and then it turned around with these big yellow eyes.”

“I blocked him so he did not get hit,” said Ms. McKenzie. “The first car to come along was Martha Murray, one of our drivers, and we got him onto the grass on the side of the road. Then we went to the office to get a box. Doug Mervyn, another driver, was here and he helped us put the box over the little fellow and brought him to the office.”

The drivers quickly adopted the little creature, who they dubbed with the appropriate moniker ‘Who.’

“We contacted the Wildlife Centre in Lively and they told us what to do with him to make him safe for travelling and to bring him over.

Another AJ Bus Lines driver, Karen Free, had stopped into the office and after she left she stopped at the Hilltop Shell and was telling the story to the manager there. “At which point Lisa Lecuyer said, ‘I will take him over.’”

The drivers pooled some funds to help defray the cost of gas for the trip. “They told us we could call any time and check on him and his case number was 733. When I checked on him later, they said he was going to The Owl Foundation in Vineland, Ontario.”

Who was now able to fly but would not feed himself and the staff at the Wild at Heart wildlife rescue centre determined that specialist care at The Owl Foundation was needed.

“The drivers then collected a $52 donation for him,” said Ms. McKenzie. “I was told he was a short eared owl (an owl of special concern).”

Ms. McKenzie noted that there are other birds needing help on the Island. “The other day Tom Shamas was talking to a man from Mindemoya and they are trying to rescue an injured sand hill crane with a broken wing,” she said. “He asked me to call him and I contacted the rescue centre on how to do this. I checked today (December 12) and they have not been able to catch him and he is contacting the centre directly.”

The wildlife rescue centre contacted by Ms. McKenzie, Wild at Heart in Lively (10 kilometres west of Sudbury), specializes in rescuing wildlife, explained wildlife worker Karen Koski. “We have received two owls so far this season,” she said. “We sent them on to The Owl Foundation as they would not eat on their own.”

The centre often receives emaciated juvenile raptors, depending on the vagaries of the season. “If there are not enough mice around the birds can find themselves in distress,” said Ms. Koski. But most of the birds that show up at the centre have been injured by vehicles.

The Wild at Heart wildlife rescue centre has been in operation at their new building at the White’s Road location in Lively since 2010, operating previously at the animal hospital since 2004. “Before that Doctor Jouppi was doing it for about 20 years,” said Ms. Koski.

The Wild at Heart Refuge Centre does not take domestic or feral cats and dogs. “We get calls about cats and dogs all the time,” said Ms. Koski. “But there are other people who take care of that. We only look after wild animals.”

The wildlife centre raises funds through the sales of its calendar, available at many stores in the Sudbury region, and gratefully accepts donations online at wahrefugecentre.org, or by cheque in the mail.

Ms. McKenzie and her compatriots at AJ Bus Lines were very pleased with how their efforts came together to rescue little Who. “It is amazing how people care,” she said.

Santa dropped in to congratulate Ms. McKenzie and to present her with a PetSave Calendar, courtesy of The Manitoulin Expositor, as a small token of recognition for the efforts of her and her fellow AJ Bus Line workers in saving Who. The calendars featuring local pets are available at the Manitoulin Publishing office in Little Current, with proceeds to the PetSave program.