“I have recently been approached by various municipal residents about at least four separate occasions when the wait times have been quite long for an ambulance,” said Councillor Marcel Gauthier at last Tuesday’s council meeting. “In one case, the individual chose to be taken by family by car to the hospital because the ambulance was 40 minutes out. Another time a similar situation occurred with someone else and they had to wait 40 minutes until the ambulance got there.”

In another example, Councillor Gauthier referred to a 911 call due to a heart attack in Little Current where the fire department and police responded prior to an ambulance.

“I have been told similar stories too,” added Councillor Bill Koehler. “And another time recently a young person with a broken leg had to wait by the side of the road for an hour, meanwhile he was minutes from the hospital. Why is the service taking so long? We pay a great amount of money (towards DSB) for people to not be getting service, especially when people are minutes from the hospital.”

“We have an older, rural population and taking 30-40 minutes to respond to calls isn’t acceptable,” said Councillor Michael Erskine.

“This is a serious matter and involves the health and wellbeing of everyone in our community,” continued Councillor Gauthier.

Due to the concerns raised by council, town staff contacted DSB, receiving a prompt response from Mr. Dominelli and Chief of EMS MacIsaac, who agreed to attend last Thursday’s Community Services and Public Works meeting to discuss how EMS services work on Manitoulin and within the district.

Thursday’s meeting began with an in-depth presentation from Mr. MacIsaac on the Manitoulin-Sudbury DSB ambulance coverage.

“Our area encompasses the districts of Manitoulin and Sudbury, excluding the City of Greater Sudbury,” said Mr. MacIsaac. “The area is over 45,000 square kilometres and larger than 115 countries in the world and larger than nine US states. We have 12 EMS stations, four of which are located on Manitoulin.”

He added that there are also numerous support systems in place in the area such as four volunteer emergency first response teams—Cartier, Cockburn Island, French River Delta and Tehkummah—and 13 tiered response agreements with municipal-based fire services and police forces.

He  also reviewed the two staffing models for the over 125 primary care paramedics with the Manitoulin-Sudbury DSB—24 hour/7 days a week (Mindemoya) and on-site/on call composition (the other three Manitoulin sites).

Mr. MacIsaac discussed what had been a large problem in the past with the Manitoulin wait times—non-urgent patient transportation. “In the absence of an alternative means of transport, ambulances are utilized taking individuals outside their communities for lengthy periods of time for diagnostic, treatment or specialist care to Sudbury (Health Sciences North),” he explained. “We have been fortunate over the last year to be participating in a North East Local Health Integration Network (NELHIN) sponsored pilot project whereby in conjunction with our local hospital partners we have been operating a non-ambulance transportation system for patients requiring transportation between medical facilities.”

Another challenge for the DSB has been the new 2013 response time plan, “dealing with patient acuity (intensity of the care required) as opposed to strict call type as dispatched, however it is highly aggressive and more tuned to an urban model of response.”

Due to a 95.3 percent inefficiency with deployment, new changes were implemented under the ‘Balanced Emergency Coverage’ concept.

“Historically, every time one ambulance received a call, another ambulance would move to a half-way point to balance the coverage for both communities,” said Mr. MacIsaac, giving the example of the ambulances that used to sit at the Manitoulin East Municipal Airport and the Cup and Saucer. “Doing so aided the community who lost its resources with a shortened response time, but the community who had a resource lost it to a half-way point, thus increasing their response time.”

After discovering the inefficiency of the deployment plan, changes were made and a new response time performance plan was initiated. Under the new plan, stations were paired by zones: Manitoulin West (the Gore Bay and Mindemoya stations), Manitoulin East (Little Current and Wikwemikong) and North Shore (Espanola and Massey).

“Standby is now implemented within any one of these zones only if the whole zone is without either available resources,” Mr. MacIsaac explained, adding that the plan greatly increased the chances of successfully meeting the time goals. “Additionally, we have a field superintendent who is certified and able to respond if needed.”

As for the specific Little Current concerns raised by council, Mr. MacIsaac explained that he was unable to comment on location or patient details, but that the DSB does look into “every concern that is raised” and that there are currently two reviews underway for this area.

“The way the current plan is arranged is if the Little Current ambulance is preoccupied the next closest ambulance will respond, typically Wikwemikong,” he further clarified. “Also, there is an additional resource available in Mindemoya from Monday to Friday between the hours of 8 am and 4 pm.”

After the presentation, Councillor Koehler asked further questions about the field superintendent.

Mr. MacIsaac responded that there is a field superintendent based out of Little Current four days of the week who can respond and is certified, but cannot transport the patient.

“I don’t think a lot of rural people are aware that there aren’t the same standby ambulances anymore out in the rural areas and that the wait time could be 40 minutes,” said Councillor Paul  Skippen. “Can you just transport yourself?”

Mr. MacIsaac responded that an individual could choose to transport themselves or have their family transport them, but that the EMS team would do their best to get there as soon as possible.

“It is a huge area to cover,” added Mr. Dominelli. “We are trying to make the best of the resources we have.”

“We paid $444,000 to DSB last year,” said Councillor Gauthier. “I’m not saying we (the Northeast Town) deserve better service, but people are concerned at the wait times. I know you can’t be everywhere, but I’m concerned too.”

“The new plan is going to save the most lives,” continued Mr. Dominelli. “This gives us the best chance and as I said, we are doing the best we can with the resources we have.”

Many members of the community attended the committee meeting for the presentation including retired doctor Brenda Caloyannis.

[pullquote]“There was an incident at my church recently when a member of the congregation had a heart problem and we were told that the closest ambulance was in Wikemikong,” explained Dr. Caloyannis. “Due to the wait time, the individual was driven to the hospital, but a number of people, including myself, were concerned with the wait time.”[/pullquote]

“There was an incident at my church recently when a member of the congregation had a heart problem and we were told that the closest ambulance was in Wikemikong,” explained Dr. Caloyannis. “Due to the wait time, the individual was driven to the hospital, but a number of people, including myself, were concerned with the wait time.”

Dr. Caloyannis said she attended the meeting to learn about the wait times and changes.

“I didn’t realize until the presentation that we were paired with Wikwemikong,” Dr. Caloyannis explained. “A supervisor did respond to the incident at my church, but it was not in the six minute time goal.”

She explained that after hearing from DSB she understands the wait times better, but was made aware of the community’s need to host CPR courses and look at inquiring after more defibrillators.

“Most of the members of my church, for instance, are in the 50 plus age range. We should be looking at defibrillators  for our church and others and other community buildings such as seniors’ halls.”

Mayor Al MacNevin concluded the ambulance discussion portion of the meeting by thanking the DSB representatives for their prompt response and presentation. 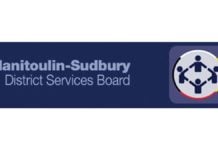