ALGOMA-MANITOULIN-KAPUSKASING – Voters in the riding of Algoma-Manitoulin-Kapuskasing will have a sixth option on their ballot, the Rhinoceros Party’s Le Marquis de Marmalade.

According to Le Marquis’ candidate bio on the Rhinoceros Party website, his full name is Le Mercury Marquis de Marmalade III, but dropped ‘Mercury’ “due to the fact that the Ford Motor Co. has more lawyers and far deeper pockets (I have no pockets or lawyers). His Cree name is ‘Runs Swiftly with Pants at Knees.’

Why the Marquis de Marmalade? “My nom de plume reflects what I believe to be the politics and times we live in, the return of Kings and Queens and the hierarchy of nobles who wear invisible crowns and take savage amusement in the subjugation of commoners. It’s pas mal malade.”

The marquis was born in the small industrial town of Decazeville, France in a log cabin which he helped his father build, his ‘bio’ reads. “Shortly after my difficult birth (apparently I came out sideways), I immigrated to Canada with my father and very angry mother and spent the following 20 formative years of my life in Kapuskasing. I then moved to Toronto where I would seek my pot of gold for 30+ years only to find a pot of lead and a lot of a—hole Leaf fans. I currently divide my time between Toronto and Val Rita–Harty, the latter being far more enjoyable. (Val Rita-Harty is located in the Cochrane area.) It’s like living on two different planets.”

“I am 55 years old, have never been convicted and possess minty fresh breath,” the Rhinoceros candidate’s bio continues. “I am single and swing left. I enjoy playing guitar poorly while watching Mexican wrestling.”

If elected, Le Marquis de Marmalade will require all groundhogs to possess proper permits before commencing any work, be it in town or rural. A fine and/or imprisonment could result if any groundhog is found without proper building permits. The candidate conservatively estimates a 100 percent increase in the deposit of roots, mushrooms, clovers, grass and wild lettuce to the public coffers.

“I will table legislation that will require the secret ingredient of partridge to be added to all meat-pie sold in Canada. To be exclusively supplied by the Maison de Marmalade (probably no affiliation). The economic spinoff of such legislation will be a great benefit to the North, but maybe not so much to the partridge. Mmm, stupid and tasty.”

Le Marquis also pledges that all tobacco will be priced at $4 a pack and will be exclusively controlled and administered by Indigenous peoples.

“Think of it as the aboriginal’s small pox in a blanket for whitey. Three dollars of each pack will go directly to aboriginals, 95 cents will go to Health Canada and five cents will be put in escrow in a Swiss bank account as a vehicle to fund spontaneous public festivals and Monster truck shows throughout my tenure.”

The candidate also promises a public skidoo and side-by-side sharing program if elected. “It will be very electric, very expensive and entirely subsidized by the big three automakers.”

Other pledges include moving the Senate to Moonbeam, following moving Parliament to Kapuskasing. “Senators would then be tasked with walking from Kapuskasing to Moonbeam as a display of personal courage and commitment to the office.”

The Rhinoceros Party is a satirical party whose purpose is to have a little fun, and poke fun, during the election process. 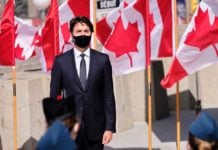