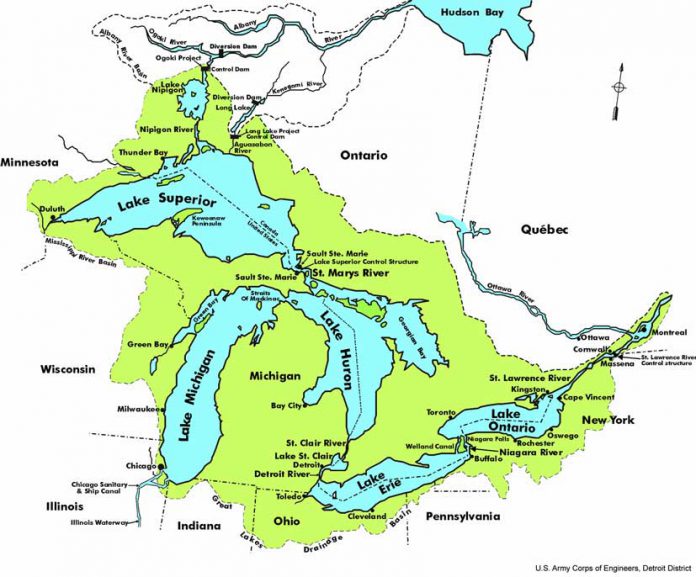 DOMINION BAY – A representative of the Algonquin Eco-Watch is furious that Ontario and Quebec were not included in the Great Lakes Compact water diversion which he says will essentially mean more water from Canada being diverted for use by the United States.

“I just received some news on that, and I’m mad as hell about it. I think the Americans put another one over on us,” stated Mike Wilton. “It’s unfortunate that Ontario and Quebec were not included in The Compact. The reason for this may lie in the fact that in that case, even though Ontario and Quebec are unlikely to receive additional water from the basin, there is a 100 percent likelihood that they will be the providers of the additional water that is diverted from the basin.”

“Therefore, if the Canadian provinces were subject to the same compact as the US states, it would not be possible for them to increase the amount of water provided to the US states—and it is obvious that the additional water required in this case will come from the two Canadian provinces,” said Mr. Wilton. “This is convoluted reasoning admittedly, however it points at the fact that in future negotiations regarding the Great Lakes Basin, all jurisdictions, i.e. Canadian provinces and US states bordering on the Great Lakes Basin, must be included in negotiations.”

“Canadians were not considered when the compact was put in place,” said Mr. Wilton. “But guess where the water will come from? They will draw more from the Hudson River and divert it to the US. And basically, the judge in this ruling said they can divert as much as they want.”

“The ALJ ruling involves an exception to the compact’s ban on diversion in the case of “straddling” communities or counties that are partly in, and partly out, of the Great Lakes watershed,” the release noted. “Here are four things you need to know about this decision and its adoption in 2008 by the eight states bordering Great Lakes. 1) Under the compact, a diversion out of the Great Lakes Basin to a straddling community must be ‘solely for public water supply purposes,’ defined as ‘largely residential,’ with some recognition of commercial or industrial customers.”

“The Wisconsin Department of Natural Resources (DNR) in April 2018 approved this new diversion of up to seven million gallons a day of Lake Michigan water via the city of Racine (Wisconsin) into a neighbouring, mostly vacant part of the Village of Mount Pleasant to serve one customer, Foxconn, and its planned 1,000-plus acre manufacturing complex to produce liquid crystal flat-screen panels,” the FLOW release explains. “The compact calls for strict application and narrow interpretation of the straddling community exception because the intent of the compact is to keep water in the basin and protect the integrity of water and needs of communities inside the basin. FLOW filed an amicus brief in opposing the diversion in March 2019, urging Wisconsin to honour the narrow limitations set forth by the compact.”

“On June 7, the Wisconsin ALJ basically rejected the arguments made by FLOW and others, completely ignoring the largely residential limitation. In short, (the judge) added new words to the straddling community exception standard in the compact to justify a diversion of Great Lakes water to aid a private international corporation.”

“The Foxconn diversion is hardly ‘residential’,” says FLOW. “FLOW and petitioner public interest organizations challenged the approval because diversions to straddling communities are prohibited unless ‘solely for public water supply purposes,’ which means ‘largely residential customers.’ The ALJ, like the Wisconsin DNR, rejected these arguments, and instead interpreted the exception broadly—in effect, changing the very definition and plain meaning of the compact and standard.”

“The decision threatens the integrity of the compact’s ban on diversions and could result in massive quantities of water to flow outside the basin—not a good outcome for the Great Lakes and the 40 million people who live in the basin,” said FLOW. ”The decision also ignored the legal principle that these waters are subject to the public trust doctrine, which prohibits transfers of public trust resources for primarily private purposes.”

“FLOW will continue to press the case that the Foxconn diversion is in conflict with both the plain language and the intent of the compact.”