ANISHINABEK NATION—The Anishinabek Nation Grand Council Chief Glen Hare is disappointed in the recent decisions of the Ontario government to cancel the meetings for The Truth and Reconciliation Commission (TRC) curriculum revisions and Indigenous languages in Kindergarten, but remains hopeful that this will not stop the continuance of Indigenous education in the Ontario curriculum.

“In cancelling these essential meetings, it’s taking a step backwards and can keep us in a place where lack of education and ignorance can continue to prevail—education is crucial to counter ignorance, so investing in education is critical in ensuring that this doesn’t happen,” says Grand Council Chief Hare. “We hope that the provincial government shares a similar interest to continue to uphold the 94 calls to action and walk the journey together towards addressing the legacy of residential schools, close gaps and remove barriers, support our culture, and reconcile relationships.”

On the first day of question period on Monday, Sol Mamakwa, NDP MPP for Kiiwetinoong, called on Premier Doug Ford to explain why he removed reconciliation from the Ministry of Indigenous Affairs and relegated the ministry to a part-time minister. “Why did the Ford government drop reconciliation from the mandate of the Ministry of Indigenous Affairs and what is behind the decision to have the minister share his time between northern affairs, mining, energy, and, Indigenous affairs?” said MPP Mamakwa.

Mr. Mamakwa said First Nations communities are concerned about the Ford government’s step backward away from reconciliation. He referred to Nishnawbe Aski Nation Grand Chief Alvin Fiddler who said, “It is difficult to see how progress can continue to be made when First Nations are reduced to only how they relate to the government’s ability to access the resources within our lands.”

During the campaign, Mr. Ford famously said he would, “get on a bulldozer himself” to get the Ring of Fire underway, and he also said, he would, “stop talking” and, “start doing.”

“From the First Nations perspective, the only way you ‘start doing’ anything in their territories is to, ‘start talking’ to their communities,” said Mr. Mamakwa. “How does the premier propose to do this with a part-time minister?”

Efforts will continue by the Anishinabek Nation and educational partners to share the history of the treaty relationships in Ontario and educate those seeking a richer understanding of treaty knowledge. The kits “We are all Treaty People” (for Grades 1-8) and the “Gdoo-Sastamoo Kii Mii” (for Grades 9-12), which were produced in 2015, are educational tools that incorporate knowledge of the treaty relationships into the classroom in various subjects in the Ontario curriculum including Math, Social Studies, Language and Art, in an interactive and engaging way.

“We look forward to continuing the development of educational tools like the ‘We are all Treaty People’ kit with Ontario so that everyone can continue learning about treaty relationships,” says Grand Council Chief Hare. “The kits have been an awesome way for kids and teachers in all schools, both Indigenous and non-Indigenous, to learn the history and significance of treaties and nation-to-nation relationships.”

In the wake of the cancellation of these meetings, many educators have taken to social media to express their disappointment and reaffirm their commitment to the TRC and bringing Indigenous education into classrooms.

“While the cancelling of these meetings is very disappointing, the public support and concern has been a testament to the need and desire from both Indigenous and non-Indigenous people to learn more about our culture and history, and I believe that people will come together, push forward and allow the good work to continue,” adds Grand Council Chief Hare. 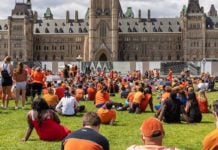