GORE BAY— The preliminary hearing in the case of Clinton Gordon Haggart , 32, accused in the Little Current arsons that took place over several months last summer, wrapped up its first phase on Thursday, June 18.

As was reported last week, whether or not there will be a trial is not in question, it will take place before a judge and jury in the Ontario Superior Court of Justice. At the preliminary hearing stage, the judge only needs to be satisfied that there is ‘some evidence’ capable of convicting the accused. At trial, the guilt of an accused must be proven by the Crown beyond a reasonable doubt.

Crown Attorney Stacy Haner and assistant CA Jeremy Schaffer questioned more than a dozen witnesses during four days of testimony, and Mr. Sandberg cross-examined many, about their recollections of last summer’s events, the who, what, why, where and when of the discovery process that leads eventually to trial and a verdict.

This hearing was lawyer Glenn Sandberg’s opportunity to question witnesses’ accounts and attempt to build the case for the defense and for the Crown, a time to assess the relative merits of each testimony with a view to the upcoming trial.

A publication ban prohibits the publishing of evidence taken at a preliminary inquiry until the accused has been discharged or, if ordered to stand trial, the trial has ended.

The seven charges are of “intentionally or recklessly causing damage by fire” to “personal property,” also to a “dwelling,” a “dwelling house,” a “garage,” a “shed,” a “recreation centre,” and a “storage facility” located at the above-mentioned addresses in Little Current.

Last witnesses were heard on Thursday and court adjourned until Monday, August 24, when the preliminary hearing will continue with one or more witnesses before a trial date is set. 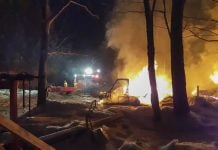 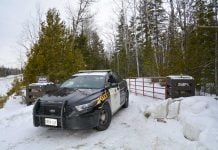 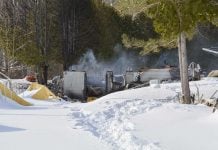 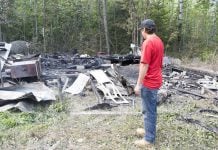