M’CHIGEENG—The Ojibwe Cultural Foundation (OCF) is featuring an art exhibit of the works of Paul Whittam, a Midland-based artist with ties to Manitoulin.

Mark Seabrook of the OCF discoverd Mr. Whittam’s art on Facebook and was drawn to his unique style.

“I came across his work and really liked his style,” Mr. Seabrook told The Expositor. “It is faintly Ojibwe Woodland, but he had taken it to his own place.”

The show at the OCF features 19 pieces, many depicting owls or Mr. Whittam’s spirit animal the otter.

“My goal is to bring beautiful indigenous stories to the people,” explained Mr. Whittam, or as he is commonly called Star Otter. “Through colour, imagery and form we can share our wonderful stories. When I create my work there will always be explanation given as to why the pieces were made and what the images represent. I want to use colour to heal. Medicine can come in many forms and my healing takes place through my work.”

Though Star Otter describes himself as “mostly self taught” he did attend the Georgian College Art Fundamentals program and took several art courses while earning an Indigenous Studies honour degree at Trent University. 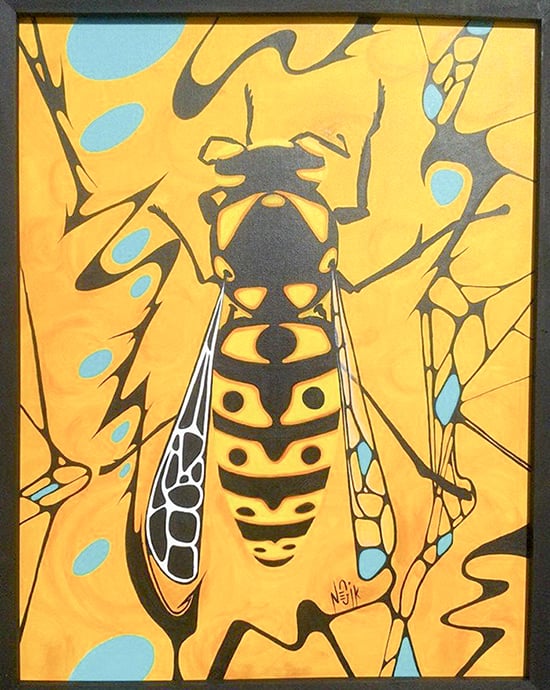 Through speaking with Star Otter, Mr. Seabrook also learned that he had a strong connection to Manitoulin.

“He (Star Otter) was adopted at a young age, but learned later in life that his family is from Sheshegwaning First Nation,” said Mr. Seabrook. “Through elders and traditional instructions he found his uncle and eventually his mother who he reunited with on Manitoulin Island.”

The works of Star Otter will be on display now at the OCF, 15 Highway 551 (the corner of Highways 551 and 540) in M’Chigeeng First Nation until Thursday, July 2.