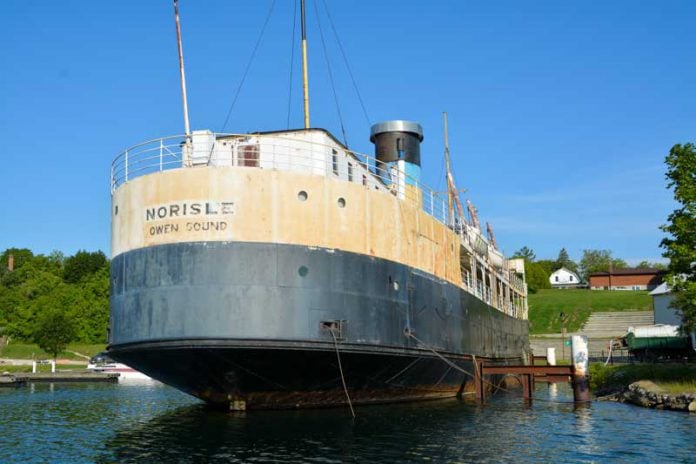 MANITOWANING—Dealing with the S.S. Norisle Steamship Society’s lawsuit, Assiginack council passed a resolution at its last regular meeting to create a new legal defense fees reserve fund and bolstering it with over $90,000 in funds from other community reserves. At least one municipal project was cancelled in the process.

At the October 17 meeting, council passed resolution No. 282-20-17 “that whereas the estimates required for the current year were set when the tax rates were confirmed via Bylaw 17-17 on the 4th day of July 2017; and whereas our legal expenses are anticipated to increase significantly due to the current lawsuit regarding the S.S. Norisle Steamship Society; and whereas this situation has been reviewed with our municipal auditors and budget reallocations agreed upon; now therefore be it resolve that we transfer $100,000 allocated to the landfill capital expansion to our legal expenses account and transfer $21,711.52 from the Microfit Payments Reserve; $23,389.47 from the Nelson Street Reserve; $10,388.62 from the Township Lots Reserve; and $37,356.15 from the Tax Sales Proceeds Reserve to a new Legal Defense Fees Reserve.”

CAO Alton Hobbs noted that when the budget was set earlier this year, $50,000 was set aside for legal and professional expenses, but due to the lawsuit levelled against them by the S.S. Norisle Steamship Society, that $50,000 has quickly turned into $170,000.

Rather than run a deficit, the CAO said, it was decided to pull from various coffers as the municipality is sure it will be seeing more legal fees. “We are prepared to go to $220,000 (in legal fees) before year’s end,” Mr. Hobbs said.

As a result, Mr. Hobbs added, the construction of a composting pad at the landfill will be put on hold until at least the spring.

On advice from their lawyer, members of the S.S. Norisle Steamship Society declined to comment.