MANITOWANING—Blasé teenagers are not usually very easily impressed, but judging from the startled reactions and more than a few screams elicited during the Assiginack Pumpkin Festival’s Haunted Ride, a lasting impression was made.

Organizers of the event admitted that the Haunted Ride “blew all expectations right out the window.” The indications that the ride was going to be an outstanding success began earlier on Saturday evening, when the magician known as Manitou Magic entertained 100 people with his act as a warmup before the ride.

The ride itself began setting out at 7 pm, taking participants on a 20-minute exciting trek through the streets of Manitowaning while seated on a wagon filled with hay bales that riders used as seats. There were 19 scare stations along the way manned by a scary group of 60 volunteers whose sole focus was to keep the Haunted Ride participants on the very edge of their hay bales.

Event coordinator Jackie White said she was delighted at the “amazing community spirit” on all sides that helped make the event an outstanding success. “There were 350 people who went out on the rides in a two-and-a-half-hour period,” she said. “We were just blown away, we expected maybe 100 to 150 people. The lineup was just amazing, it wound all the way out the arena.”

On Sunday at noon, magician Stefano Presenza entertained a large crowd in the gazebo sponsored by Cambrian Insurance, while a host of children’s games took place in the tennis court enclosure, numerous vendors were on hand to ply their wares and the five teams taking part in the pumpkin catapult competition were setting up their pumpkin launching systems.

There were plenty of upsets during the weekend, including two young cooks who “stole” the top prizes in the pumpkin baking competition right out from beneath the noses of their considerably more experienced opponents. Grandmas beware, there are some new kids on the block. Connor Phillips’ pumpkin loaf placed first and Brenda Newman came in second, while Connor’s younger brother Lane secured third place.

Of the five teams who entered the festival’s final event, the pumpkin catapult contest, most were returning veterans, but it was the new team captained by Dave Eade and Mitch Harasym that won by a good chunk of a country mile. The winning entry was engineered by Mr. Eade and powered by massive elastic bands winched down a long heavy wooden frame. It’s a good thing the bands weren’t pulled to full power during the competition as the second shot from the machine easily cleared about a quarter kilometer (250 metres), a fully charged pumpkin might have quite literally have left the park entirely.

Mr. Eade might almost be considered a bit of a ringer, what with that mechanical engineering degree (and a year of co-op) from the University of Toronto. “It wasn’t all that complicated a calculation from an engineering standpoint as much as it was a time constraint,” said Mr. Eade. “We really only had about two weeks to pull it all together.”

When it came to the launch, the pull was only 90 percent of the potential. The number of bands was quite a bit less as well. “We had it designed for 48 bands, but in the end we only had time to attach 32,” said Mr. Eade. “They took a lot of time to stitch together.”

“We also didn’t have it at full elevation, that would have been at 40 degrees, a lot of people think it’s 45 degrees, and if it fired up past the atmosphere it would be, but it isn’t going to go that high,” Mr. Eade smiled. There were a number of discoveries in the single test shot that meant a bit of a sleepless night correcting the design, he admited.

As to why the team went with an elastic band powered unit rather than the more common trebuchet design, which uses a massive counterweight to propel the launch arm toward the target, Mr. Eade said it was again a matter of time. “The trebuchet would have been less expensive, but the calculations are a lot more difficult to work out.”

An effective trigger mechanism is also more challenging for the trebuchet design, he said.

So what is the technical name for the final design of the Harasym Team’s machine? “It’s a slingshot,” laughed Mr. Eade. It’s really not much different than one of those kid’s slingshots you see hanging out of Dennis the Menace’s back pocket. “Just a lot bigger.”

Any comments by onlooking kibitzers about how a simpler design being better as the design team struggled with last minute adjustments fell silent after the team’s jaw dropping single shot streaked across the field to secure the $500 prize.

The Harasym-Eade catapult was built for Mr. Harasym’s nephew Landen, a cancer survivor who was celebrating his 12th birthday during the competition. The beaming younger Harasym was fully engaged as part of the team that assembled the behemoth pumpkin launcher into place.

The previous pumpkin hurling contest winners, the Deforge family (ably assisted by members of the Debajehmujig Storytellers crew), were magnanimous in defeat, but vowed to return to the top of the podium next year.

It won’t be an easy feat, as the chief engineer on the winning contraption, Mr. Eade, was already taking notes of what needed to be adjusted to improve on the firing mechanism.

“We haven’t really been working on it all that long,” noted Mr. Eade. “It’s been about a month. We only had a chance to partially fire it last night before we brought here.” The contest has been a great learning experience for all involved.

The Assiginack Pumpkin Festival was blessed with outstanding weather, with the originally called-for rain making no appearance whatsoever so that the events took place with unseasonably warm weather and under clear skies. 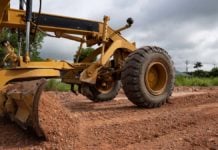