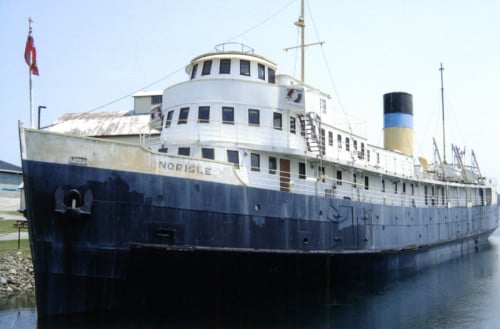 ASSIGINACK—The Expositor has learned that the S.S. Norisle Steamship Society’s legal proceedings against the Township of Assiginack could cost taxpayers an estimated $775,000.

According to a Superior Court of Justice document, affirmed on August 18, the Township of Assiginack’s attorney Ian Flett of Eric Gillespie Professional Corporation estimates the costs of defending the lawsuit will cost between $675,000 and $775,000.

Assiginack CAO Alton Hobbs said he was unable to comment on the case, as it is in the hands of the courts. However, Eric Gillespie was able to expand on the legal proceedings.

“The estimated costs were submitted to the Superior Court of Justice and we will be asking the court at an upcoming hearing to request the Norisle Steamship Society pay the township’s legal fees upfront if they wish to continue their claim against the municipality,” said Mr. Gillespie. “The litigation will be very expensive and it is the defendant’s view that the taxpayers of Assiginack should not have to pay the costs.”

“We have been through the process of discoveries,” continued Mr. Gillespie. “As a result of the process, it has become clear, in the township’s view, that there is little if not any merit to the steamship society’s claim. We feel the case should be dismissed now without a trial, and we believe that there is sufficient information to allow the court to do that.”

Mr. Gillespie said that the township has already incurred costs associated with the claim. Based on the schedule, it would be roughly $125,000.

Dave Ham, chair of the S.S. Norisle Steamship Society, said he was surprised by the estimated costs of the legal proceedings, but was unable to comment.

“The case is in the courts so I cannot comment,” said John Coulter, director of restoration for the Society, regarding the claim.

When asked about the potential litigations costs to the town, Mr. Coulter responded, “We didn’t bring this upon ourselves.”

“We made the claim because of the actions of the township,” said Mr. Coulter. “If the township hadn’t taken action (to sell the Norisle), the ship would be dry docked and on its way to being restored.”

The Township of Assiginack entered into discussions with the Tobermory Maritime Association (TMA) last year to sell the S.S. Norisle to the TMA, to be sunk and used as a dive site in Tobermory.

The Steamship Society responded by launching a lawsuit against the municipality claiming $10 million in damages in addition to an order declaring that the Society is the owner of the Norisle by way of constructive trust. They also claimed $250,000 for aggravated, punitive and/or exemplary damages; an interim order restraining the town from disposing of the Norisle until the matter has been tried; an interim order compelling the township to continue to provide status quo administrative tasks including providing all risk insurance; to maintain its current accessible dockages, road access and snow removal, utilities service and ongoing maintenance at its expense until this matter is tried; full indemnity costs of this proceeding plus all applicable taxes; and “such further and other relief as to this honourable court may seem just,” according to the Statement of Claim.

As well the claim goes on to accuse Assiginack of breaching a joint venture agreement between the town and the Society, a breach of fiduciary duty, unjust enrichment and constructive trust, negligence and damages.

A court date has not yet been set, but Mr. Gillespie said the two parties are looking at a date in December of this year or January 2018. 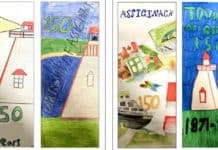 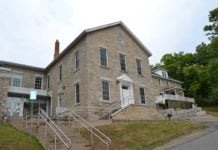 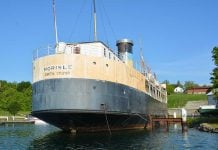 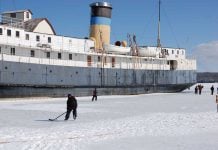 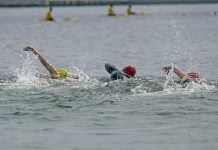