“The 2017 Ontario Junior Citizen Finalists have been selected and will be recognized by OCNA member newspapers for their outstanding achievements,” states a press release from the OCNA. “The 12 individuals are future leaders making conscious efforts to see change in society and are working hard to make a difference both locally and globally. Although very different and unique, they all share one aspect in common—they are all truly inspiring, and their stories illustrate creativity, determination and generosity.”

“I was really excited to hear that I will be receiving this award,” Autumn told The Expositor, an OCNA member newspaper. “I feel really proud that the government and other organizations are acknowledging the work I have been doing.”

“At just 13-years-old, Autumn is a role model and veteran activist,” notes the OCNA press release. “She is proud to be Indigenous and feels very passionate about preserving the environment and creating awareness for the importance of clean drinking water. She was one of two youth advocates chosen to represent Canada during the 2015 Children’s Climate Conference in Sweden, and during the 2016 Winter Meeting of Canada’s Premiers in Vancouver, she addressed her concerns directly to Prime Minister Justin Trudeau. Autumn recognizes that water is the lifeblood of Mother Earth and it needs to be protected. Through traditional water ceremonies and speeches across the country, Autumn is helping to make the world a better place for kids that come after her.”

“Autumn is a phenomenal girl,” said Grand Council Chief of the Anishinabek Nation Patrick Madahbee. “She is very aware of the importance of water and the environment. We are all very proud of her and her many accomplishments.”

In February, Autumn will speak at the Assembly of First Nations in Vancouver at a water symposium and the Indigenous Women’s Forum in Ottawa.

The Ontario Junior Citizen Awards are promoted through the 280 member newspapers of the Ontario Community Newspapers Association.

Nominations of eligible youth aged six to 17 are received through member newspapers committed to recognizing the outstanding leaders who are making a difference in their communities. Nominees may be involved in community service, are young people who are contributing to their community while living with a physical or psychological limitation, or individuals who have performed acts of heroism or bravery. Candidates are also recognized for being ‘good kids’ who show a commitment to making life better for others. A panel of judges unanimously agreed on the final award recipients.

The final recipients and their families will be invited to a special ceremony in Toronto to receive their award in March of this year. 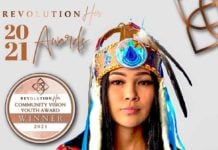