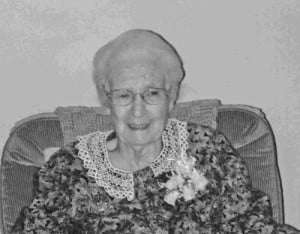 Peacefully with family by her side, Azetta Stephens (nee Sterling) of Little Current, entered into the presence of her Lord and Saviour on Tuesday, February 7, 2012 in her 96th year. Azetta was born September 6, 1916 to Wilson and Emma Sterling and raised near Spring Bay on the Sterling farm overlooking Lake Mindemoya. She was a cheerful, active person who from a young age loved to tell others, especially children, about Jesus. She taught Sunday School with her lay preacher father, and later in her own home. She was a great prayer warrior, who brought us all before the throne of God. After her marriage to Ellwood Stephens in 1938, they farmed near Providence Bay where they raised their family. They moved to Little Current in 1968, where Azetta enjoyed working in the hospital laundry. Needlework, crocheting, and especially quilting were a joy for her, right up until the last days of her life. Everything was given in love to her family as soon as it was made. Her home had a revolving door, with fresh muffins, applesauce, love and prayers, for everyone who came through it. The pivot of the family, “Nanny” was deeply involved in her children, grandchildren, great-grandchildren, and their multitude of friends. Azetta is predeceased by her beloved husband of 49 years, Ellwood, sons Hughie and Mark, and grandson Michael Jansen. Also predeceased by her parents, Wilson and Emma (Gilpin) Sterling, and siblings George, Ruth Tustian, Harold, Leonard and Lloyd. Deeply missed by children Don and Sharon of Sudbury, Richard and Sharon of Providence Bay, Ruth and Richard Watters of Tillsonburg, Barbara and Evert Jansen of Honora Bay, Luann and Clifford Butler of Texas, and daughter-in-law Patty of Little Current. Lovingly remembered by grandchildren Derek (Cheryl), Phillip (Elsie), Cathy, Brent, Anita (Tim) Crombie, Richard (Nadine), Matthew, Cheryl (Ed) Scrouton, Paula (Frank) Kempf, Serena (Marius) Verboom, Kyla Jansen, Erica (Thomas) Connerty, Peter Jansen, Darryl (Brenda) Butler, Chris Butler, Hugh (Amber), Caleb (Stephanie), Nathan (Tara), Marcus, Patrick and great-grandchildren DL (Shannon), Lee, Ryan, Liam, Jessyka, Ethan, Brady, CJ, Marena, Alaina, Arian, Neils, Silva, Alexandra, Brianna, Keira, Arya, Sofia, Paige, and Fiona. Visitation was from 7 pm – 9 pm on Friday, February 10, 2012 at Island Funeral Home. Funeral Service was at 11 am on Saturday, February 11, 2012 at Grace Bible Church. Burial in Mindemoya Cemetery in the spring. Donations to Gideons or the Heart and Stroke Foundation. Arrangements entrusted with Island Funeral Home, Little Current. “Absent from the body, present with the Lord.” 2 Corinthians 5:8.