EDITOR’S NOTE: The Expositor will be checking in regularly with this couple who have ties to Manitoulin Island as they embark on their Big Wild Year challenge. This is the eighth update since they began.

NORTH BAY – September was another month full of adventures, new foods and a media feature for Jeremy St. Onge and Delphanie Colyer as they work through their Big Wild Year, with the fall season easing its way in at a later date than previous years.

“It’s been really exciting to be doing some new things,” said Ms. Colyer.

“We were just starting to get mushrooms in last week. That’s very slow; this time last year we had already picked 40 to 50 pounds of them,” added Mr. St. Onge.

Mr. St. Onge, a Canadore College environmental studies professor, and Ms. Colyer, a nurse with roots in Wiikwemkoong, have turned 2019 into their ‘Big Wild Year.’ For the whole calendar year, they will only be eating foods that occur naturally in the environment. They are not growing anything for the challenge and have made some allowances for purchasing locally-occurring wild foods.

The couple travelled to Little Britain in mid-September as keynote speakers for Harvest Gathering 2019, a weekend event that included workshops, storytelling and the sharing of knowledge and goods.

They presented at last year’s event about what they thought the year would entail, and the two said they enjoyed contrasting some of their expectations versus the reality they experienced.

That same weekend they attended an Ojibwe-led wild rice gathering workshop that included a few people from Manitoulin.

“It was our first time seeing wild rice and we got to be in the canoe. I had two kids with me and we were super pumped. We got to harvest (wild rice),” said Ms. Colyer.

Along the drive home, they stopped to pick a great number of black walnuts and apples.

“Every spare inch we had available in the truck was filled with apples. The kids had to have their legs up over them,” said Ms. Colyer, who estimated she has eaten at least 100 fresh apples this month.

She remarked that they had become accustomed to eating much softer food during the year and their jaws were sore until they got used to the firm apples.

The two visited Fast Track Kennels in Beachburg, a hunting outfit that uses radio-collared dogs to track prey such as bears.

“We didn’t get a bear but we did get a bunch of mushrooms and acorns which, in the grand scheme of things, is almost as good,” said Ms. Colyer.

The operation was an interesting experience for the couple.

“It was super neat to see how the guy handled the dogs and to hear the sounds they make change when they’re trailing, following or have a bear up a tree,” said Mr. St. Onge.

He said the owner was willing to save some discarded bear fat for the couple from hunters who did not wish to take it home.

As it stands, the couple said they have enough fat to last until later this week when racoon season opens. They also managed to bring in about nine grouse in the past month and have been fishing more, though Mr. St. Onge has to be back in school to teach his classes.

“The kids are all back to school so the schedules are a little tighter to make sure we’re around for pickup and things like that,” said Ms. Colyer.

Ms. Colyer said their stock of greens, fruit and berries is looking promising for the cold season. They also have work to do at the sugar bush to prep for the coming winter.

The Big Wild Year was recently featured on a TFO show about foraging and they roasted their gifted spring crane as part of the shoot.

“Oh my God. It was so good. It was definitely right up there along with bear as a favourite,” said Ms. Colyer. “It was like a good piece of steak but, I don’t know, it’s got a bit of a different flavour.”

They stuffed it with a mix of cooked rice, cranberries, fresh apples, leeks, maple, salt and dehydrated grapes from last year.

“It kind of stole the show. I can’t even remember what we ate with it,” said Ms. Colyer with a laugh.

In preparation for the ongoing hunting season, Mr. St. Onge got a new rifle to improve their feasibility of finding fresh freezer fodder.

“My old one was like a welded Frankenstein. I bought it when I was maybe 18 in university; I got it as a cheap used deal,” he said.

Ms. Colyer said the old gun’s aim was wildly off-centre and made last year’s hunt rather difficult. This year they have already shot several grouse as well as a duck which disappeared.

A recent early morning hunt saw a small flock of geese fly near, but not directly toward the couple as they canoed, something that was less than ideal but did not detract from the experience.

“It’s just so much fun to be out there,” said Ms. Colyer.

The two passed another milestone this month: fewer than 100 days remaining. They roasted duck, grouse and squirrel and made soup from the leftovers.

“That was our celebration. We’ve started counting down now,” said Ms. Colyer.

With the year winding down, the couple said their attitude toward the challenge has changed.

Mr. St. Onge said he had dreams throughout the year about eating ‘regular’ food and feeling guilty, but he recently dreamed about eating a bag of potato chips and felt no remorse. As for Ms. Colyer, the amount of supplies they have already collected has put things into perspective.

“It really hit us that the year is winding down. In some ways, there’s a little attitude shift because it’s almost over. I feel a little more relaxed; we’re still a little panicky because we’re trying to keep up, but at this point we could probably get by with what we have in the freezer,” she said. “I don’t want to say it too early, but it feels like we’ve done it.” 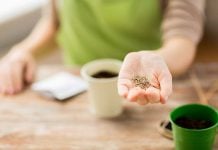 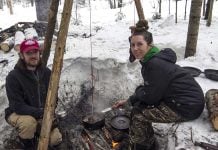 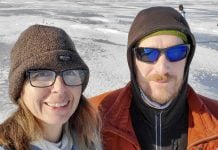 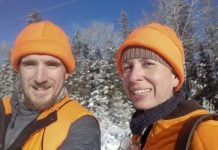 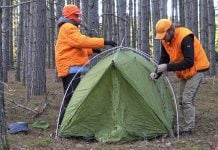 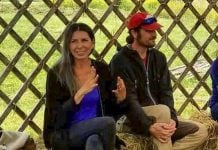