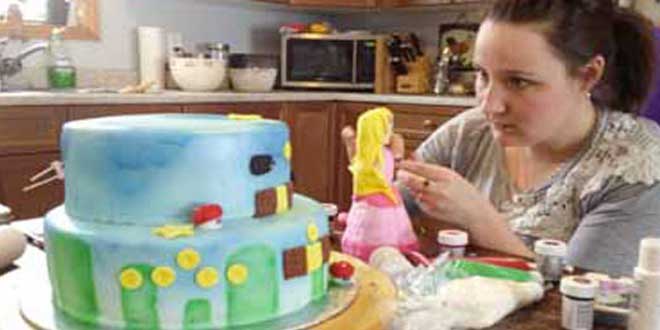 BIRCH ISLAND—Candace Perrault of Birch Island just starting making custom specialty cakes last fall but already word of her artisan baking skills and incredible cakes has spread throughout her community and around Manitoulin, with orders coming in daily.

“My first specialty cake was last October,” Ms. Perrault explained to The Expositor, as she carefully worked on a fondant Princess Toadstool figure for a Mario birthday cake in her Birch Island kitchen. “My brother-in-law was getting married and I was asked to make a bachelor cake; it worked out so well that two weeks later, I was asked to make their wedding cake. I panicked about the wedding cake—they wanted it to be four tiers and it was only my second cake, but it turned out great.”

Ms. Perrault said that after her wedding cake, other people started contacting her and asking her to make specialty cakes.

“It just started snowballing after the wedding cake,” laughed Ms. Perrault. “I knew my maternity leave was ending in January and I wanted to stay home with my daughter so I needed to find a source of income I could do from home. I was getting a lot of cake requests, so I thought I could turn my cake making into something.”

And turn it into something Ms. Perrault did. Her new cake business, Candy Cakes, gets on average four orders a week, with cake bookings on her calendar all the way to December.

“The whole community and Manitoulin has been so supportive,” she said. “I wouldn’t have been able to make a go of this without them. I really have them to thank for liking my cakes, supporting me on social media and through referrals and encouraging me.”

Though Ms. Perrault has no formal cake training, she has always had an artistic knack and is learning as she goes.

“I’ve been doing a lot of research on cake design and I started taking a course through Wilton at Michaels in Sudbury on Mondays this month,” she explained. “All my cakes are made from scratch; I make my own icing and cake and everything on the cakes is edible. My favouite cake is my chocolate with chocolate buttercream—it’s so moist, but I can make pretty much any request. I’ve done a lot of vanilla cakes and I have a request for red velvet coming up.”

Many of Ms. Perrault’s cake requests are for popular cartoon characters, but she says as long as she has a photo idea she can replicate, she can design and/or make just about anything.

“I like to be creative, so my favourite cakes are when I’m asked to do something personal around the idea of who the person the cake is for,” she added. “I made a cake recently for Don Genereux and I was given a photo of him to work from and I made a fondant figure of him. It was really fun.”

With a busy 1-year-old, Lily, Ms. Perrault balances her new business by making most of her cakes at night, sometimes staying up until the early morning.

“I was up until 3 pm last night, but I’ll get to have a nap with Lily later,” she smiled. “I love staying home with my daughter and I like making cakes, so it’s a win-win for me.”

Another favouite thing for Ms. Perrault is the reactions to her cakes.

“I love seeing clients’ reactions when they come to pick up their cakes or when I drop them off,” Ms. Perrault said. “Sometimes, people send me photos of the person the cake was for and their expression when they see it for the first time—it makes it all worth while.”

Candy Cakes start at around $80 and go up in price depending on the detail required, while wedding cakes average around $350.

“It’s not really the size of the cake that determines the price, but detail,” she explained. “The average cake takes me about six to eight hours to make, as everything from the cake to the details are handmade and edible.”

Looking through the Candy Cakes portfolio, it’s easy to see that even the simplest cake has hours of meticulous work behind it.

Ms. Perrault and her partner of 15 years Phil Bowerman Jr. are in the process of building a new house, with the plans having recently changed to include a bigger kitchen, which will eventually serve as the new Candy Cakes base.

For more information about Candy Cakes or to view the cake gallery, join Candy Cakes on Facebook or call 705-282-4078.