WESTERN MANITOULIN – Two Western Manitoulin gentlemen were feted with drive-by birthday parade  celebrations this past Saturday. Archie Cadden of Meldrum Bay and Erwin Thompson of Evansville were both surprised by the celebrations.

While Mr. Cadden’s actual 95th birthday wasn’t until this past Sunday, May 29, the drive-by birthday celebration was held on Saturday morning. Mr. Cadden acknowledged he was very surprised by the  birthday parade being held in his honour, and enjoyed the more-than-deserved attention, smiling and waving at well-wishers.

Mr. Cadden’s niece Susan Feindall had requested Karen Noble of Silver Water to organize the drive-by parade and sent out email invitations to his many friends. Well over 20 cars and pick-up trucks with local and area residents honking vehicle horns, waving and wishing him a happy birthday, passed by Mr. Cadden’s residence driveway on Saturday morning.

Diane Jones had visited him a half hour before the celebration to let him know what was happening and make sure he would be at the end of his driveway to greet all the well-wishers.

“What a surprise!” stated Erwin Thompson as he and friends Gerry and Ellen Leblanc sat in chairs at the end of the former’s driveway this past Saturday afternoon as friends and neighbours from all over the Island honked horns, waved and wished Mr. Thompson a very happy birthday.

Mr. Thompson had earlier been at the drive-by 95th birthday party for Mr. Cadden in Meldrum Bay and while he was preoccupied with that activity, Tammi Middleton, the main organizer of the gathering for Mr. Thompson, hung balloons and birthday wishes signs on his hedge and on the side of his driveway.

The procession of vehicles, which included Fire Chief Jeff Middleton in the township of Burpee and Mills fire truck, had to number close to 50. One of the groups included Jeff Gilmore and family, along with Peter Carter and Laurie Zahnow in a boat with a large banner wishing Mr. Thompson a Happy 75th birthday and singing ‘Happy Birthday.’ As well, Jim Smith of Mindemoya got out of his vehicle and played a rendition of ‘Happy Birthday’ for Mr. Thompson on the saxophone. Karen Noble was among those who handed over a basket of baked goods for Mr. Thompson to enjoy, and he also received numerous birthday cards.

Another special gift he received, from his brother in Edmonton, was $1,500 (based on 75 years at $20 per year for his birthdays) over that time.

Mr. Thompson again reiterated how surprising the event was for him. He was wearing a sweater on Saturday that was his late father’s, and he was adorned  with a funny 75th birthday top hat provided by Ms. Middleton. He also regaled those who stayed a few minutes after the parade (physically distancing of course) of his having had a mishap in a local cemetery earlier in the day where he stepped in a hole and fell face first onto the ground. He stayed down a few minutes before getting up-dazed and confused, but fortunately was not seriously hurt. 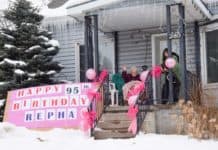 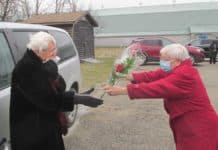 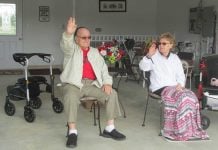 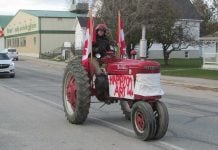 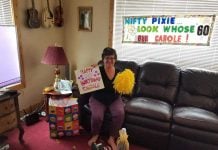