WIKWEMIKONG— When the Chicago Blackhawks made the Stanley Cup playoffs again this season, Stitch Manitowabi came up with an epiphany. He called up family member Cindy Fox, who works as a cultural coordinator with the American Indian Cultural Centre, and pitched a plan to come down for the victory parade.

“I said when ‘you guys win, we want to come down and be part of the celebrations’,” he recalled.   “We will dress in our regalia and be a part of the proceedings.”

Ms. Fox thought it was a great idea and began to make the arrangements.

The Chicago Blackhawks are sponsors of the American Indian Cultural Centre and have gone to great lengths to ensure that their use of the name of the Anishinaabe chief, from which the team derives its designation, is used in a respectful way. “They make every effort to make it right,” said Mr. Manitowabi. “They ensure that the name is used in a culturally astute manner.”

So at the 11th hour, Mr. Manitowabi gathered up four friends, elder Raymond Jackson, Doris Peltier and Lyndz Shawande, found a fuel efficient vehicle, and set out for the border.

“If I had taken my truck it would have cost a fortune,” laughed Mr. Manitowabi. “We drove for 13 hours and I was up for over 37 hours straight.”

But the trip was worth it, he said.

“It was quite the spectacle,” said Mr. Manitowabi. “When we walked into the stadium to our VIP seats, 75,000 fans parted like the Red Sea,” he laughed. “People were asking, ‘are you for real’ and I told them I was.” 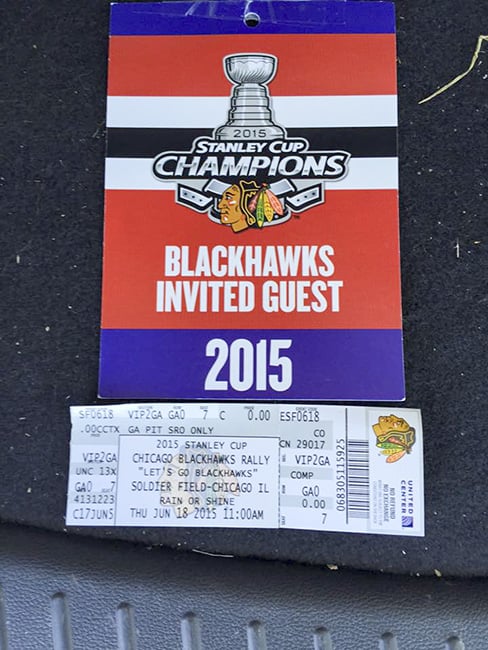 The reception was great at the parade, with fans posing for selfies with the regalia clad Mr. Manitowabi. Media outlets swarmed the four. “There were television stations, radio stations interviewing us, even a Chinese radio station interviewed us,” he said. The interviews and fan interactions gave Mr. Jackson, a First Nation elder, the opportunity to speak about the Anishinaabe and their traditions.

“It was all done downplaying the stereotyping,” he said. “We spoke about our Chief Blackhawk and the warrior spirit that he represents in the team name.”

Mr. Manitowabi noted that the approach of the Chicago Blackhawks is far more respectful than that of other American sports teams such as the Redskins or the Braves. “They have a completely different approach,” he said. “Not like some organizations.” He noted that the Blackhawk organization ensured that the Stanley Cup visited the local powwow and that young Natives got an opportunity to interact with members of the sports organization.

The experience was not without its costs, however. “It was like 32 degrees the whole time,” laughed Mr. Manitowabi, whose black-based regalia and face paint were a challenge. “I drank lots of water and kept myself hydrated,” he said. “But man it was hot.”