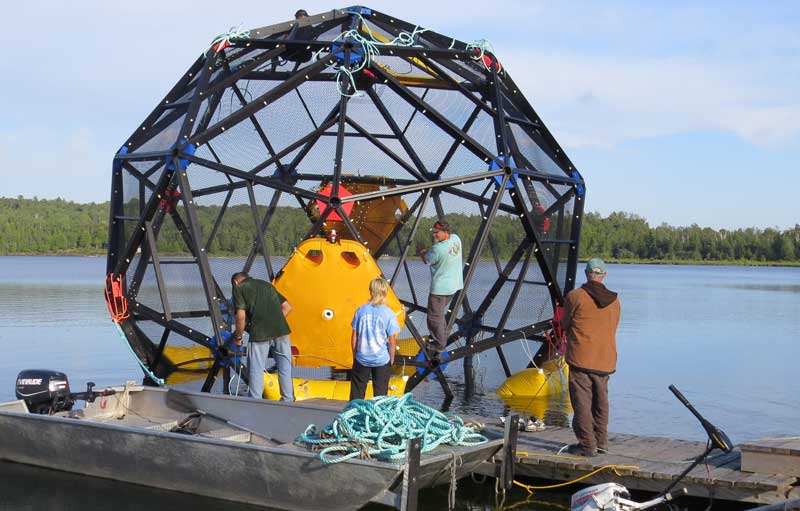 MANITOULIN—While the expectations of the Blue Goose Pure Foods beef cattle industry on Manitoulin may have come to a screeching halt (all of its beef cattle were sold off earlier this year), the organic food company is having good results with its farm-raised rainbow trout with veteran aquaculturalist Mike Meeker at the helm.

The Expositor spoke with Mr. Meeker on Monday afternoon, en route to Ottawa where he was scheduled to appear as a ‘witness’ before a Senate committee on aquaculture on Tuesday afternoon, representing the industry. Sorry to be missing his Manitoulin Secondary School Mustangs girls’ hockey team game against Lively on Tuesday (Mr. Meeker is also the coach), he is pleased to represent his industry.

Blue Goose is also awaiting an application that is currently before the Ministry of Natural Resources and Forestry (MNRF) to create a new fish farm site at the former Camp Adanac property on the West End. This property was sold in the Blue Goose sell-offs that took place over the past year, but Mr. Meeker explained that a long-term lease has been signed with the new owner, allowing for a farm to take place. What won’t be happening, however, is the proposed research centre, at least not at that location. An aquaculture research centre is definitely on the Blue Goose list of future projects though, he said.

Blue Goose took over the lease from one of the buildings at the Purvis Fisheries Burnt Island site last spring and has been growing fish there since April.

“The fingerling situation in the province has gotten really tight,” Mr. Meeker said. “Growers in southern Ontario were designed to grow small fish, five grams, but the bigger the fish we can put in the cages, the better.”

Mr. Meeker explained that during the 1980s a 3/4 pound whole fish was the standard, but four to five pounds is the new standard.

“From now (December) until April, we’re not growing fish, so we have to optimize that,” he continued, noting that the Island farms are growing fish faster than anyone else in the province, thanks largely to climate. The optimal temperature for growing a rainbow trout is between 18°C and 20°C, which can be attained in Island waters.

“If we put in a fingerling in the spring that’s 100 grams, we can take that fish to market size by February,” he said.

Having southern Ontario suppliers that are designed to grow small fish works out well for Mr. Meeker and his crew, who buy them and continue to grow them. At the new facility at Burnt Island, ground water means the water stays close to 7° and 8°C in winter, which means the fish will continue to grow all winter long.

“This is really important to the economics of the situation,” he added. “Just like any farming, if your animal isn’t growing, you’re not making any money. The cost involved in growing a fish until November, then keeping it for six months to not grow, that definitely cuts into your profit margin.”

Each of the Blue Goose sites sees one million pounds of fish harvested each year—the maximum allowed for their size, which is relatively small, he explained.

The company is also working closely with research biologists to perfect the genetics of the fish they are growing, including making sure they are native to the province, which in turn means that the fish are acclimatized to Ontario waters and the bacteria that are found within them.

Word is spreading about the rainbow trout too, with Blue Goose putting more focus on seeking out chefs who like, use and will tout their product, including Ted Reader, who is known for his love of the barbecue, and now his love of Blue Goose rainbow trout, as stated on one popular Toronto morning television program.

The organic brand of trout is hugely popular, Mr. Meeker explained, as it is the only certified organic rainbow trout farmed in the country, right in Evansville. “It’s a niche market, but it’s a large niche market that’s growing,” he said. “Everything we have swimming in the water is sold out.”

Much of the product is also being trucked to British Columbia where the love of steelhead is growing in leaps and bounds and where there is a shortage of the fish. Steelhead, Mr. Meeker explains, is a large rainbow trout.

Blue Goose is currently supplying Loblaws, Sobeys, as well as a number of restaurants, with grocery store chains in the United States also expressing an interest.

While Blue Goose rainbow trout continues to grow by leaps and bounds, the industry is lagging behind worldwide.

On Tuesday, Mr. Meeker was to speak to the Senate committee on what is stopping the industry from growing and finding ways to bring federal and provincial agencies together to streamline the process.

The final report from the Senate committee on aquaculture is expected to be completed by the end of June with promises of changes to the industry following soon after, Mr. Meeker said.