﻿PROVIDENCE BAY—The distinctive sound of banjos could be heard echoing across the Providence Bay fairgrounds this past weekend at the first Bluegrass in the Country (BIC) festival since the pandemic got underway to rave reviews.

Over the course of the weekend, some of the most talented names on Bluegrass scene came to join local musicians to entertain the audience, and entertain they did.

“Isn’t this wonderful?” said BIC organizer Brother John Featherstone. “These musicians are all so very amazing!”

Turnout for the event was solid, he noted, but there was one little fly in the ointment. “I really hoped we would see more people filling the campgrounds, but the local community has certainly come out to support us.” The grounds might not have been full, but there were still a fair number of trailers and campers in evidence, somewhat remarkable given the recent spike in fuel prices.

“I think this tells us a story,” said Brother John. “You get your best result by sticking close to home,” referencing the on-Island market, the North Shore and Sudbury as key regions that were well in evidence at the festival. “If you try to get people from Nashville here, you will lose your shirt,” he laughed.

Bluegrass in the Country is a fundraiser for Manitoulin Special Olympics (MSO) and MSO organizer Janet Anning took a turn onstage to highlight the outstanding accomplishments of the Island’s Special Olympians.

Among the athletes who have again taken up competition is a five-member team headed to competition in North Bay this weekend that includes Linda McCulligh, John Hopkin, William LeClaire, Aaron Nickol and Elizabeth Cooper.

A surprise performance by Island vocalist Ellie Maxwell brought the audience to its feet in a standing ovation following her songs.

Over the last couple of years, Matthew Bedard, who had qualified for the Special Olympic World Games in Russia, continued to train hard in the hopes the World Games would again take place. Sadly, the ongoing conflict in Ukraine stymied that hope as the games have now been cancelled.

Still, Matthew is in the best shape he has ever been, noted Ms. Anning, so who knows what the future might bring?

This BIC had a bittersweet moment, as the event is bidding adieu to founder Brother John, who is moving to Manitoba to be closer to family.

“We will miss him,” said Ms. Anning, “we will miss the whole Featherstone family. Austin Featherstone was our first athlete to qualify for the World Games. But we wish them well and are grateful for all they have done.” Ms. Anning noted that Brother John will still be only a phone call away.

It is not clear yet who will be taking on the mantle of BIC organizer (there are some names being bandied about). “It’s early days yet,” said Brother John. “Right now, we are just focused on the weekend.”

Although the event had to be moved into the Providence Bay arena due to a wet Saturday, the drizzle did nothing to dampen the mood and feet were kept tapping through the evening. 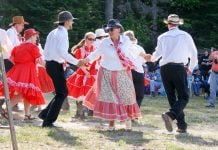 Bluegrass in the Country gears up for 10th anniversary event 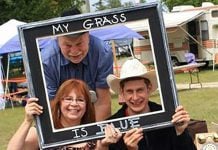