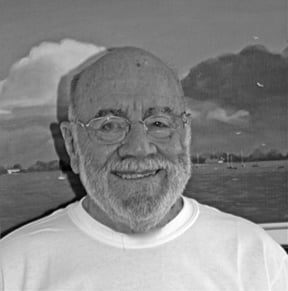 Brian Robert Chapman died on Wednesday, March 7, 2012 at the age of 92 years. Brian went to sea at sixteen where he served as a steward on the original Queen Mary until the outbreak of WW2 when he enlisted in the British Royal Navy. He served as a sonar detector operator on ships throughout the war in the Mediterranean and the Atlantic. After the war he married Gladys (Fan) Merritt from his home village and they moved to London, England where Brian worked as an artist in an advertising company painting ads on buses. In 1958 they immigrated to Toronto, Canada where Brian continued to work as an artist in a commercial advertising firm. He became the art director of the company and worked there until his retirement. In 2002, after being widowed, Brian met Brenda Chapman, also widowed, on a painting trip in England and ended up in Little Current, Manitoulin Island with a whole family of Chapmans. Brian was predeceased by his first wife Gladys (Fan) and by his parents Tom and Madeline Chapman and his sister Madge of England. He will be remembered lovingly by his wife Brenda, stepchildren Jamie, Joe, wife Tracey, children Maggie and Kate; Patricia, children Nicholas, Hannah, Daniel and Max. Brian will be remembered for the fulfillment he found in painting, his enjoyment of music especially jazz, and playing the trumpet but mainly for his sense of humor, his quick wit and above all his irresistible love of life and family. A memorial will take place Saturday, March 17, 2012 between 2 pm and 4 pm at Island Funeral Home. Friends are invited to come and celebrate Brian’s life with us. Arrangements entrusted with Island Funeral Home, Little Current.