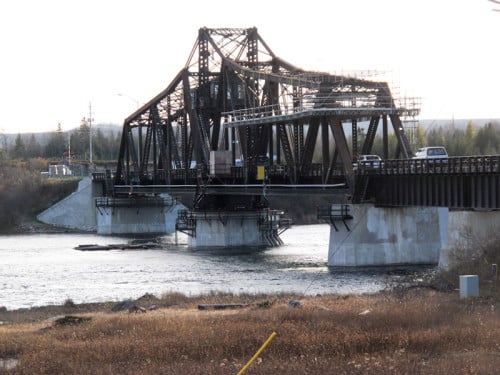 EDITOR’S NOTE: This is the current installment of a series that will focus on Manitoulin’s iconic swing bridge which, in 2013, will celebrate a century of service as Manitoulin Island’s physical, year-round link with the mainland.

This series, which will lead to festivities planned around next year’s centennial event, seeks to give early twenty-first century Manitoulin people a sense of the construction of the bridge and the coming of a rail link to the North Shore 100 years ago.

Anyone with memories or anecdotes to share about the swing bridge may do so by emailing editor@manitoulin.ca or by phoning The Expositor at 705-368-2744.

This week’s installment of The Manitoulin Connection is a recent look at the process involved in repainting the old structure and is written by Expositor staff writer Robin Burridge. 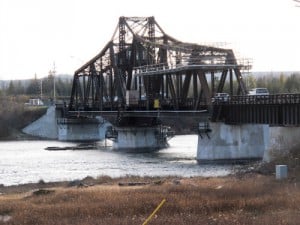 The sandblasting and repainting project on the Little Current swing bridge, which began on November 1, 2011, is now 65 percent complete and on schedule to be finished by mid-March.

Glavin Coating and Refinishing was chosen to complete the project by the Ministry of Transportation (MTO), with Glavin bidding $1,889,000 during the tender process.

“The project completes our multi-year rehabilitation program that has taken place over the past 12 years,” Gordan Rennie, director of regional issues and media advisor for the northeast reagion, told The Expositor. “Since 1999, the ministry has invested over $15.5 million to upgrade the swing bridge to ensure it continues to operate safely for many years to come. This includes upgrades to the bridge’s mechanical and electrical systems, pier, substructure, deck and upper structure.”

MTO and Glavin extended a site visit to The Expositor last week to view the status of the project and to see first hand how the structural coating is done.

Our tour guides were Gordon Gregory, quality inspector on the project from Tulloch Engineering and Ben Glavin, contractor of the project.

The first thing Mr. Gregory discussed was the environmental safety protocols of the project.

“Environmental safety is a huge part of this project because the existing coating contains lead,” explained Mr. Gregory. “There are a number of systems in place to prevent dust and sand, from going into the atmosphere or the North Channel.”

Mr. Gregory pointed to a large machine at the south end of the bridge with long hoses connected to the enclosed work area, explaining that it was a large dust collector.

The area of the bridge being worked on is completely enclosed, and whenever sand blasting is taking place the dust collector is turned on, cleaning the air in the enclosed area.

Mr. Gregory added that in addition to the dust collector, there is a large vacuum at the north end of the bridge, connected by another long tube that workers can use to vacuum up debris.

“Because of the high lead content, the debris collected by the vacuum is contained in large white bags that are transferred to a special waste site in southern Ontario,” added Mr. Gregory.

Once inside the contained work area, Mr. Gregory and Mr. Glavin explained the process of coating the bridge.

Mr. Gregory explained that it is a three step process after the initial sandblasting of the structure.

The first step is an epoxy zinc coating applied to the bridge, followed by an epoxy primer and completed with a topcoat of polyurethane.

Also part of the project, Glavin has refinished the outside of the control booth. It’s now a beautiful black to match the bridge’s new coating.

While speaking with Mr. Glavin, he revealed that the project has been going very well.

“It’s the biggest project we have done as a company to date, but it is going quite smoothly,” said Mr. Glavin. “The warm weather has been helpful. We were prepared for minus 20 degree weather, so the weather we have been getting has been a pleasant surprise.”

Mr. Glavin also told The Expositor that the project was “bang on schedule.”

“If everything keeps going as it has, our completion date is March 14.”

The recoating of the bridge comes at an opportune time, as 2013 will be the centennial of the swing bridge.

Already in the works for what has recently been confirmed by the MTO as the oldest bridge in the provincial highway system is a year-long Island celebration of the sentinel.

Northeast Town Mayor Joe Chapman, along with councillors and community members, have formed a Centennial Bridge Committee, which will be spearheading events for what is being called ‘the year of the swing bridge.’ 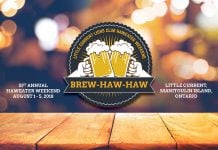