GORE BAY – Students and staff of Charles C. McLean Public School in Gore Bay hosted a fine tribute to all those veterans who have, and those who are serving in Canada’s Armed Forces, at its Remembrance Day ceremony.

“Welcome staff, students and community members; thank you for joining our school to celebrate our Remembrance Day event,” said C.C. McLean Principal Tracey Chapman on Monday. She pointed out there were two special guests in attendance, Constable Darryl Leighton with the Ontario Provincial Police (who also served in the Canadian Armed Forces) and Warrant Officer Trevor Williamson, who is currently part of the CAF.

“Remembrance Day provides the opportunity to remember the brave men and women who contributed and fought for our freedom and peace,” said Ms. Chapman. She mentioned that the students had created artwork, stories, songs and poetry that were displayed in the school and relating to the significance of Remembrance Day. “Students and staff are wearing poppies proudly today, in honour of the people who gave their lives so that we could live in peace and freedom. Our staff and students thank you for taking the time to be with us to reflect.”

Master of ceremonies Alexis McVey introduced fellow student Leah Heinen who explained the significance of Remembrance Day. “Today is significant across Canada and many countries throughout the world, people gather to remember those who made the supreme sacrifice.”

Ms. McVey said, “in May 1915, one of Dr. John McRae’s closest friends and comrades was killed in the trenches near Ypres, Belgium. He was buried in a humble grave with a simple wooden cross. Wild poppies bloomed between the crosses marking the many graves. The next day, unable to help his friend or any of the others who had died, Dr. McCrae gave them a voice through this poem.”

The act of Remembrance was provided by Landon Seifried and Hailey Wadge. The Last Post recording was played by teacher Bruce Lindsay, followed by two minutes of silence and Reveille.

Athena Gravelle then led everyone in the Commitment to Remember. This was followed by the Grade 4/5 students’ song, ‘Last Night I had the Strangest Dream’ by Ed McCurdy, led by teacher Ray Scott on guitar.

Mr. Scott and his Grade 4/5 students led everyone in O Canada to conclude the service. 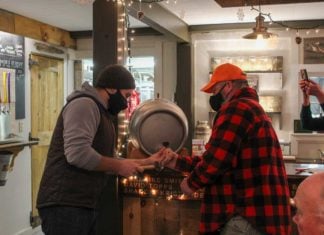