SHEGUIANDAH—Residents of Sheguiandah, who have been without a post office since last February, will not see its return to their community according to Northeast Town Mayor Al MacNevin.

Northeast Town council learned at a meeting last week through correspondence to Mayor MacNevin that it is the intention of Canada Post to “permanently close the Sheguiandah Post Office.”

In an email from Pino Caputo, local area manager, Sault Ste. Marie, to Mayor MacNevin, Mr. Caputo writes: “We informed you of how we came to this decision and explained the ‘difficult to staff process.’

“I’m not sure when they made this determination,” Mayor Al MacNevin told The Expositor. “They couldn’t get anyone to apply.” He also noted the circumstances Canada Post requires for a new post office, such as supplying the location as well as being responsible for its maintenance, snow removal, security and more. The mayor said that this makes the the job less than ideal.

“They asked to meet with me on December 4 and told me the news,” the mayor continued.

Mayor MacNevin explained that, right now, packages requiring a signature are picked up at the Little Current Post Office if no one is home to accept the delivery. There is an average of four packages per week requiring this service, he was told.

Currently, the wheels are in motion to make Green Acres a ‘stamp and call-for site’—a place for residents to purchase stamps and pick up parcels.

“We’re disappointed to not have the Sheguiandah post office, but it’s better than driving into Little Current,” the mayor said. “We’ve been told they need a month to put it in place.”

“I’m pretty disturbed that that’s not going to be occurring,” Algoma-Manitoulin-Kapuskasing MP Carol Hughes said of the closure. She said it was indicated to her that Canada Post went through the process “internally and externally and weren’t able to find a candidate to take this on.”

“I’m still not happy with the turnout—the whole point is accessibility for the people,” the MP said.

Ms. Hughes said she would be writing the minister, the Honourable Judy M. Foote, adding, as Mayor MacNevin did, that Canada Post made the position “not financially viable.”

Canada Post did not advertise for applicants to fill the Sheguiandah vacancy in The Expositor where such an advertisement would also have been automatically posted to the paper’s well-read online “job board.”

A date has not yet been set by Canada Post for Green Acres becoming the new stamp and call-for site. 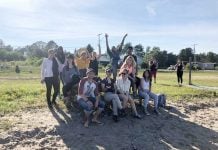