QUEEN’S PARK – As of January 6 the province will begin accepting applications from those who wish to become licenced cannabis retailers.

In a government press release announcing the province’s move away from the lottery system of allocation for licences, the release notes that this stage is about screening individuals, as people with certain cannabis-related convictions, or known connections with organized crime, will be ineligible to apply.

Prospective retailers will also have to complete training approved by the province’s cannabis regulator—Alcohol and Gaming Commission of Ontario (AGCO).

Those who pass this stage can then apply to open a cannabis store at a specific address after March 2. As an added caveat, store locations may or may not be approved—those locations will have to be located a certain distance from schools (undefined in the release). There will also be a 15-day period in which community members will be able to file objections.

Beginning in April, the province’s cannabis regulators anticipate issuing store licences at the rate of about 20 a month.

“In response to the federal government’s decision to legalize cannabis, our government is determined to open the cannabis market as responsibly as possible,” said Ontario Attorney General Doug Downey. “We have said all along that opening more legal stores is the most effective way to combat the illicit market, protect our kids and keep our communities safe. That is our number one priority.”

Other amendments to the pot regime include increasing the ability of licenced producers to participate in the retail market and allowing them to open a store at one of their facilities. These changes enable more capital, experience and capacity to enter the market and will help more legal stores open faster; will phase in limits on the number of authorized stores a licence holder can have, to ensure fair access for retailers while creating medium and long-term market certainty; and enable retailers to sell additional cannabis-related items such as cannabis-related magazines and cookbooks.

The province assures the public that it continues to have strict rules for private cannabis stores aimed at helping to “keep kids safe and ensure retailers behave with integrity.” Those rules include regulations that deny licences to anyone with certain cannabis-related offences or any association with organized crime. Regulations also require licence holders, cannabis retail managers and employees to complete approved training.

Some of the 42 proposed cannabis stores selected through the second lottery have been authorized to open their doors this month. Until August 31, retail operators may own a maximum of 10 cannabis stores. That increases to 30 stores in September and 75 by September 2021.

Retailers are required to comply with the Cannabis Licence Act and regulations, as well as the AGCO’s Registrar’s Standards for Cannabis Retail Stores. Prospective retailers must post a public notice at their proposed retail location; the AGCO will accept comments from the local community for 15 days. 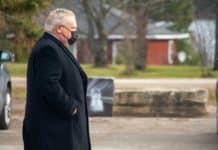 School board, parents perplexed as to province’s stand on graduation ceremonies