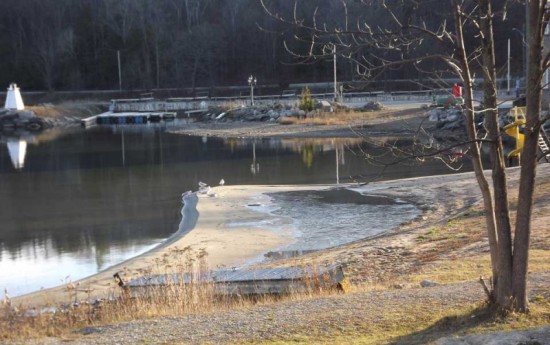 OTTAWA—A petition which circulated on Manitoulin, urging the federal government to make low water levels in Lake Huron a priority and which garnered over 3,000 signatures from both Islanders and those with an interest in Lake Huron levels, was tabled in Parliament last week.

On Wednesday, Algoma-Manitoulin-Kapuskasing MP Carol Hughes marshalled a group of New Democrats, including Northern Ontario MPs Claude Gravelle and Glenn Thibeault as well the party’s Transportation Critic, Olivia Chow, to bring the issue some prominence as they tabled the petitions (organized by Mike Wilton of Dominion Bay) with more than 3,000 signatures gathered on Manitoulin Island. The MP followed that up with a statement on the issue on Friday.

Ms. Hughes told her colleagues that low water has economic and environmental impacts that can no longer go unaddressed.

“Wetlands are endangered, docks and boat ramps are high and dry, exposed water lines are freezing, and the harbour at South Baymouth on Manitoulin Island will have to be dredged so the Chi-Cheemaun ferry can reach the dock,” Ms. Hughes said. “Property values are affected and now freighters on the Great Lakes are running light so they don’t bottom out.”

“The International Joint Commission (IJC) has adopted a wait and see stance that isn’t sitting well with the communities, businesses, and individuals affected,” Ms. Hughes continued, referring to the Great Lakes Regional Adaptive Management Plan which was recently announced by the IJC. A Sierra Club press release states that in January, American IJC Commissioner Dareth Glance acknowledged that water levels were getting lower, but were still “within historical ranges.” Ms. Glance said that because there is “so much uncertainty,” both Canadian and American governments should simply ‘adapt’ to the reality of lower water levels.

“They (constituents) want action and are pointing to the derelict work order for compensating structures in the St. Clair River as a good place to start,” Ms. Hughes said.

The MP is calling for action on a century-old work order to create compensating structures that will reduce Lake Huron’s flow into the St. Clair River as one part of a solution that could be addressed quickly.

While low water levels is a story that seems to be picking up momentum, Ms. Hughes is concerned that the government remains silent on the issue.

“With water levels down in all the Great Lakes, it’s time to protect these Canadian crown jewels and reverse the mounting environmental and economic crisis,” she said.

“I am certainly very pleased that Carol Hughes picked up on it,” he said. “She deserves the vast majority of the credit, and her staff too.”

Mr. Wilton said he was happy that his MP had implied that the issue of low water levels “is not over till it’s over. It’s really good to see that happening.”

He said he believes Islanders are probably more aware of the problem as we are surrounded by water, but that the recent trend of national news agencies reporting on our plight is good news indeed.

The petition reads, “Since 1999, the water level in Lake Huron has dropped 4-5 feet (150 centimetres) with no sign of rebounding 13 years later. This is far greater than previous fluctuations and has caused immeasurable damage not only to significant aquatic wetlands and spawning areas along the shores of the North Channel, Manitoulin Island and Georgian Bay, but is causing serious economic and safety concerns to communities in this area, many of which depend in large measure upon tourism, cottaging and boating during the navigation season.”

As of early December 2012, the level of Lakes Huron and Michigan (which share a common water level) was determined to have finally dropped below chart datum, establishing a new record low.