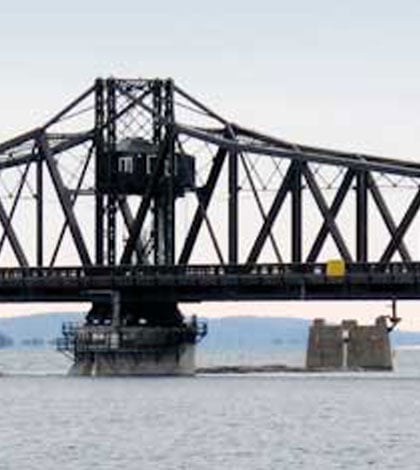 This date, Monday, November 18, marks the actual 100th anniversary of the very first swing of the Island’s iconic swing bridge and the Expositor Office has solicited the cooperation of the Ministry of Transportation to reenact the event, at the very same time as in 1913: 9 am.

This is still the “Year of the Bridge” and this reenactment will likely be the last event in this busy year that has focused on 100 years of fixed cross-channel transportation.

This reenactment: that’s where the ringing church bells come in as that’s the same thing that happened 100 years ago, according to a Manitoulin Expositor report dated November 20, 1913: “Amid a loud and continued salvo of steamer, tug and railway engine whistles, assisted by the pealing of church bells and the tooting of launch horns, that massive swing bridge that joins the Manitoulin to the North Shore easily and gracefully swung off the trestle on which it was erected and curved around into position shortly after nine o’clock on Tuesday morning, November 18.”

This year’s ceremonial swing will be, of course, quietly driven by electrical power. That first one in 1913 “was done by hand as the machinery is not all connected yet for the engine to do the work,” the paper reported, adding that, “a few days will see this completed.”

In 1913, the report goes on to say, “Everything worked perfectly. Not a single hitch occurred as it swung noiselessly into place.”

The bridge’s fanciful steel framework, in 2013 still the subject of much photography, was much admired a century ago by the Expositor scribe who noted on that day of the important first swing that, “although the bridge is massive, yet it has a very light, graceful and artistic appearance and reflects great credit on the designer.”

A century ago, the bottom of the bridge’s draw was 23 feet above the water, the story said. It will be more this centennial year, guaranteed.

By the way, Mrs. Barnhill was the “first lady who walked across with her husband and child” and the first man from Manitoulin to cross was a Mr. McGillis (no first name was reported).

Back to the present, the Expositor is inviting everyone who wants to be present at the ceremonial, centennial swing to gather at the Little Current end of the bridge just before 9 am and cheer on the event. (There is parking available at the adjacent tourism information centre.)

Following the brief spectacle, The Expositor invites participants to warm up with a cup of hot chocolate and a treat at Three Cows and a Cone, just up the way.

The Expositor Office is making special commemorative buttons to give to those attending the event to mark the occasion.