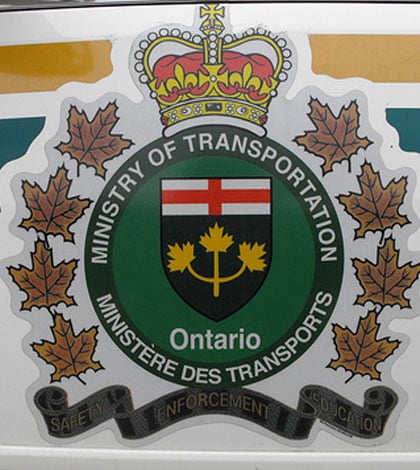 MINDEMOYA—Central Manitoulin council is fully supportive of the Township of Nairn and Hyman on its concerns with maintenance standards on Highway 17, but believes that concern should include all highways in Ontario, including those on Manitoulin.

“We’re supporting the motion by Nairn-Hyman council and also comments made by our council members that either the MTO (Ministry of Transportation) should be upgrading the status of area highways or re-look at the criteria they use for the class they give a particular highway,” stated Gerry Strong, mayor of Central Manitoulin, after a meeting last week. “Mainly we feel we should have the same level of service for all highways on Manitoulin Island as other areas.”

“The poor quality of winter road maintenance is universal,” said Mayor Strong. “There are a lot of issues on Manitoulin and we have all written and complained about the road conditions.”

“The problem is you take your life in your hands travelling the highways around here,” the mayor continued. “On Tuesday, the MTO closed the highway between Providence Bay and Mindemoya because of visibility with the weather, but the problem here is more with the bridge design than road maintenance.”

“We (Manitoulin councils) all get the feeling the MTO is not listening,” said Mayor Strong. “We have a problem with the intersection in Mindemoya, and the problem with the bridge at the lake (between Mindemoya and Providence Bay), and still we hear nothing from the ministry.”

“If we, as the normal John Q Public, did something to consciously lower the level of care of our roads and someone was killed, someone would be fined and going to jail,” said Mayor Strong. “But the Ontario government did this, reduced the level of care on highways and people are killed, and still they do nothing.”

Council passed a motion that the municipality support the December 16, 2013 resolution of the Township of Nairn and Hyman regarding Highway 17 maintenance standards during the winter months.”

In a letter to Kathleen Wynne, the Ontario premier, on December 23, Nairn-Hyman noted it had adopted the following motion at their meeting of December 16. “The township of Nairn and Hyman has received several complaints about the maintenance standards on Highway 17 from both ratepayers and surrounding communities: and the Ministry of Transportation has designated Highway 17 from Sudbury to Massey a Class 2 highway with maintenance standards less than Highway 69, (divided highway section) out of Sudbury despite higher traffic volumes on Highway 17 as per statistics provided by the MTO; and the Township of Nairn and Hyman feels that there cannot be a price put on human life due to winter road conditions; and we have already lost a life on this section of Highway 17 this year.”

“Therefore be it resolved that the Township of Nairn and Hyman request the Minister of Transportation examine the highway classification and redesignate Highway 17 to a class one highway or to at least re-examine the maintenance requirements to reflect the necessary standards required of that of a class one highway due to the higher volume of traffic on this section of highway,” said the Nairn-Hyman motion, and be it further resolved that copies of this resolution be forwarded to the City of Greater Sudbury, Township of Baldwin, Township of Sables-Spanish Rivers, Town of Espanola, all municipalities on Manitoulin Island, all area First Nation communities, the Ontario Provincial Police, Michael Mantha, MPP for Algoma-Manitoulin and the Honourable Glen Murray, Minister of Transportation, and the Honourable Kathleen Wynne, premier of Ontario.”

“As Ruth Frawley, our municipal clerk, said at the meeting, why is her or other people’s lives on Manitoulin less important than someone in Toronto?” the mayor said. “That’s what they (MTO) are basically saying—that life in the North is worth less than one in Toronto. Congratulations to Nairn Hyman for going after the province on this issue, and we are in full support.”