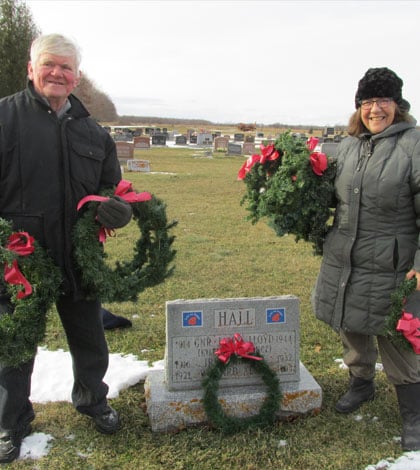 GORDON—“It’s not about the gifts that people give to each other at this time of the year, but the gift we received from our veterans long ago that led to peace and freedom in our country,” stated Sylvia Kemp-Fletcher of the three year-old annual veterans wreath laying ceremony that took place at the Gordon cemetery this past Sunday.

Ms. Kemp-Fletcher originally got the idea for the wreath laying ceremony “from a news article about people laying wreaths in tribute-memory of veterans at the Arlington Cemetery at Christmastime.”

“I thought this is a wonderful tribute to our veterans,” explained Ms. Kemp-Fletcher. “I wanted to do something local for all our veterans who have served. We are laying a wreath at each of the veteran’s headstones in the cemetery and Barb (Barfoot) and I working on a project to make sure we can identify all veterans in our cemetery every year in the same fashion.”

Ms. Kemp-Fletcher pointed out she had originally contacted Veterans Affairs Canada (VAC) representatives who felt the wreath laying ceremony was a wonderful idea, “but they could not provide me with a list of the local veterans who served because the Privacy Act does not allow for it, but the township has lists of all veterans from Gordon and Barrie Island that have served in our forces so Barb (who is a municipal councillor) may have access to information I can’t get.”

Ms. Kemp-Fletcher stressed, “if someone knows of someone who has served in any conflict for our forces and we have not laid a wreath down at their gravesite in the Gordon/Barrie Island cemetery they can get a hold of me so it will be on our list for next year.”

The first year the local veterans wreath laying ceremony took place it was held a week before Christmas. Last year the lousy weather conditions made this impossible.

After this past Sunday’s ceremony Ms. Kemp-Fletcher said, “I was very pleased to see so many people come out today to take part.” She pointed out the first year she had told Jim Woods about the project who then told his wife Jo, who gathered a group together to make the wreaths. “About 10 people made the wreaths and Barb Culgin has provided new ribbons to put on the wreaths every year we have held this ceremony.”

Wreaths were placed around about 80 veteran’s headstones this past Sunday. “I think it’s really, really important to recognize all our veterans and bring them back into the fold at this time of the year especially,” said Ms. Kemp-Fletcher.

The Gordon/Barrie Island culture and recreation committee has taken over ownership of the wreath laying ceremony, “which is great,” she stated. “The more we get the township and other members of the community involved, the better. It’s just so important to hold this ceremony every year and I hope that it will expand, maybe next year we can hold a little service as part of the day.”

After the ceremony a carol sing, with music provided by Nicky Hinds, Oliver Runnalls and Doug Smith, was held,with all those participating having the opportunity to enjoy tasty treats at a potluck dessert feast as well.

Now and Then – Dick Ahlers