MANITOULIN—It didn’t take many games for members of the Jordan Chandler rink to get into prime form as the team qualified for the men’s provincial championships this past weekend.

Team skip Jordan Chandler and his brother Kyle are both Haweaters (with the latter, who is lead on the team, now living in Sudbury). The brothers, along with vice Trevor Bonot and second Nick Bissonette, won both of their games at the Northern Ontario Curling Association (NOCA) men’s West Qualifier this past weekend in Fort Frances. The team, representing the Little Current Curling Club, was competing against Dylan Johnston rink based out of the Geraldton Curling Club and the Sagel Mercer rink from Sioux Lookout for the two provincial qualifying spots.

The Chandler rink won both its games, 7-5 over the Johnston rink and an 11-0 shutout of the Mercer rink to qualify.

“We played not too bad,” said Jordan Chandler this past Sunday. “We have only played four games as a rink, with one of our guys, Colin Koivula, having been replaced after he sustained an injury early on in the season. He is hard to replace having been to the Brier and played in several nationals previously. He was replaced by Nick Bissonette, who is only 20 and who used to play on the Horgan rink. He is a very good player.”

“We seem to be rounding into form at just the right time,” said Jordan. Prior to this season, it had been several years since Jordan and Kyle had been on the same team.

The rink was the runner-up at the Goldline US Open of Curling-Contender Round in Blaine, Minnesota this past September.

Jordan pointed out that “all of this is only possible because of the fantastic support we receive from our team sponsors. The rink has a lot of support and sponsorship from Manitoulin and some from Thunder Bay as well.”

The provincials are to be held the last week in January 2020, in New Liskeard. 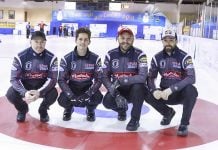 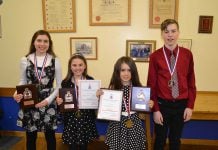 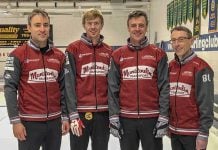 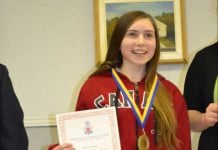 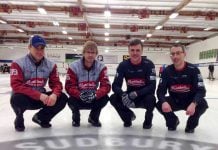