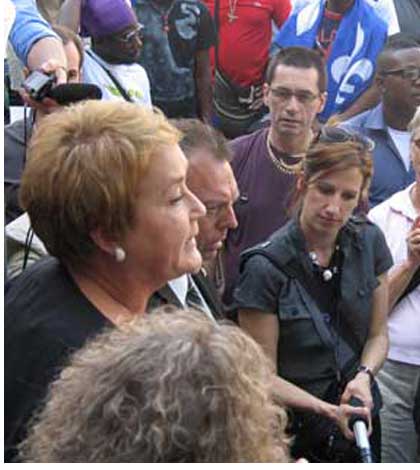 The so-called Charter of Values that Quebec’s provincial government is determined to legislate into the law of La Belle Province is, on its face, goofy enough to simply laugh at.

Although many may find the notion of requiring civil servants to shed the outward signs of their religious beliefs during working hours (turbans for Sikhs, burkas for Muslim women, yarmulkes for Jewish men) as an inappropriate gesture in these multicultural days in Canada, the impending law may signal more about another attempt by Quebec to leave Canada by referendum than about anything else.

In the rest of Canada, we have (by and large) come to terms with turban-wearing Mounties (similarly in all branches of the Canada’s armed forces). Burka-clad girls are on the streets of our towns and cities and the fact that their hair is covered by a headscarf is clearly irrelevant to their peers as they all chat and giggle heading to or from school or any other social endeavour. Not too visible on Manitoulin but often seen in even slightly larger places.

The same thing, at least in Ontario, in stores and in the civil service.

The burkas worn by Muslim women who subscribe to a conservative denomination of their faith is not different at all from the bonnets worn by Mennonite and Amish females from adolescence on (and, for some practitioners of their faith, beginning even younger).

The conservative and modest values that are part and parcel of the beliefs of some Muslims, some Mennonites and virtually all Amish citizens of this country that dictate head coverings for women do not harm anyone else and allow these individuals to live comfortably and publicly in the world.

For conservative Sikh men, the rule is simple: they do not cut their hair and beards and the turban is simply a way in which they are able to contain their long hair. Barely visible beard nets accomplish the same thing for facial hair.

The separatist Parti Quebecois (PQ) government in Quebec that wrested power away from former Premiere Jean Charest’s triple-majority Liberals in the provincial election of 2012 owes yet another effort to secede from the Canadian confederation to the sovereignist voters who helped them gain office.

Premier Pauline Marois is very likely keeping a weather eye on how the Charter of Values is being received in English Canada and how much criticism of the initiative will be directed at her government and, by inference, at the people of Quebec, from the rest of the country.

If criticism is vociferous and sustained, Ms. Marois and her sovereignist allies may well use this as an excuse to foment for yet another referendum on some form of sovereignity.

The rationale will be “They don’t understand our values” or the closely related “They’re telling us how to manage our own house” and after suitable outrage is encouraged in Quebec at outside interference, the notion of trying for another referendum won’t be far behind.

There is every likelihood that this PQ initiative, this Charter of Values, will centre out a visible minority of Quebec’s citizens in order to create a controversy that, in turn, could help kindle enthusiasm for referendum number three.

No matter what its objectives, the Quebec government is throwing a segment of its own citizenry under the bus for, at the very least, the debate on the topic in Quebec will legitimize those racist tendencies that, for some people, always lies just below the surface. The provincial government’s Charter of Values will be seen by some of these people as legitimizing their worst instincts and the talk about “they should go back to where they came from” could easily become sidewalk café chatter.

This is a political gambit by the Parti Quebecois that, in playing to this particular gallery, appealing to both sovereignists and racists, is bound to do far more harm to its society than accomplish anything else.

It is political opportunism at its most base level.