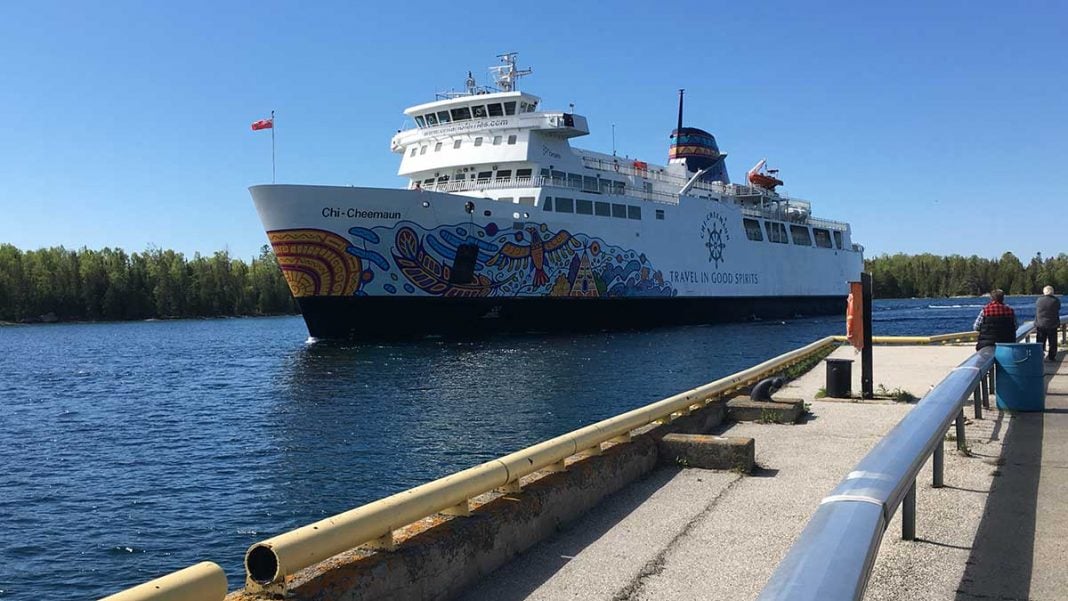 One month later than usual and with restrictions

SOUTH BAYMOUTH – The Chi-Cheemaun ferry’s start date has proved to be something of a barometer of both the natural and social environments. This Monday’s month-late season sailing start certainly underscored this fact.

Seven years ago, at about the lowest ebb of Lake Huron’s historic water level, the sailing season’s start was delayed for two weeks while adjustments were made to the docking facility on the Tobermory side to accommodate the low water and the access to the ship’s car deck for vehicles. This was the result of a staring contest between the federal Conservative government and the Ontario Liberal government of the day about jurisdiction and which government had the responsibility to pay for the renovations. (Ontario finally did the work.) A couple of years after that, following an unusually cold winter and more ice than usual forming in Georgian Bay, the Chi-Cheemaun’s sailing season was delayed by a day when winds pushed modest icebergs across from the eastern side of Georgian Bay to block the access to the Tobermory harbour and Owen Sound Transportation Company CEO Susan Schrempf noted at that time about the ferry, “she’s not an ice breaker!”

A day later, winds had pushed the ice back across the bay and the season began.

This Monday’s sailing season start, June 1, was the latest on record, a full month after the scheduled beginning on Friday, May 1.

This delay was in the interest of  “flattening the curve” of the spread of the COVID-19 virus and this spring’s sailing season is restricted to commercial traffic and other essential traffic, at least through this month.

Both sides of the South Baymouth terminal parking lot were lined with people who had come to mark the beginning of the Chi-Cheemaun’s sailing season.

Heather Niven and daughter Maddie from Providence Bay were there for just that reason: “we often come to see the last boat leave South Baymouth (the Sunday following Thanksgiving weekend),” Heather Niven commented, “but this is a special occasion.”

Dave Lavell, from Tehkummah, was there to count the number of vehicles coming and going on that first trip: “19 came off that first sailing and 21 left for Tobermory,” Mr. Lavell said.

There was one foot passenger who disembarked, and a large family group went aboard for the return trip, crossing on a bright and sunny morning with modest winds.

Ms. Schrempf, contacted by the Expositor Monday, noted that, “our phones are ringing steadily today as more and more people are calling for reservations.”

“We’re still screening purpose of travel as we continue to be under the Transport Canada Interim Order prohibiting leisure and recreational travel on ferries. People don’t realize it, but there are fines involved with violating the interim order. Individuals can be fined up to $5,000 and the company can be fined up to $25,000 per incident so we really need people to work with us and be honest,” Ms. Schrempf stressed.

“I fully expect that the ferry will be able to start carrying people for the purpose of leisure and recreation at some point in July when tour boats also start operations,” Ms. Schrempf added.

Until that time, reservations are required for travel on the Chi-Cheemaun and must be made by telephone. The toll-free number is 1-800-265-3163. An interviewer will ask questions about the purpose of your trip before granting a reservation. Walk-on passengers must also reserve in this way.