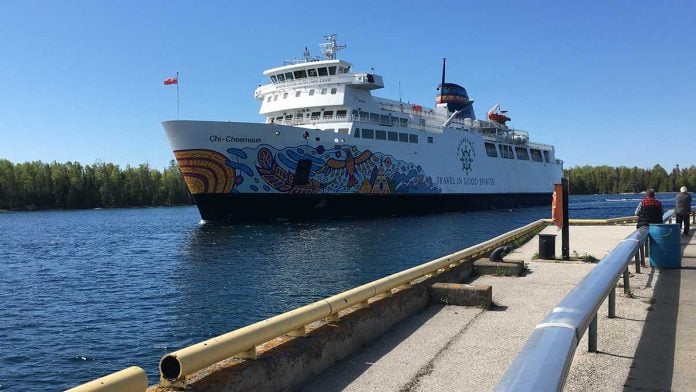 OWEN SOUND – All sailings of the M.S. Chi-Cheemaun ferry service had to be cancelled this past Sunday due to a shore ramp mechanical issue at the Tobermory site.

Susan Schrempf, president and chief executive officer of OSTC told the Recorder this past Tuesday, “the ship is fine, but it can’t leave the docks when the ramp is sitting on it.” She pointed out the system at the docks in Tobermory are opposite from those at South Baymouth, explaining, “the bow visor lifts and the interior ramp goes down and it rests on a little shelf. The shore ramp comes down on top of it. However, the power system didn’t want to transport and lift the weight in this case. Basically, the ship was trapped because the system wasn’t working properly.”

“The backup system, which was recently serviced, then failed,” said Ms. Schrempf. “The hydraulic contractors were called in to do the required work on the system. We are using the back-up system currently and hopefully the needed part will be installed in the ship in the next day or so.”

“We decided to shut down the ferry all day Sunday,” said Ms. Schrempf. The ship was full of passengers travelling from Tobermory at the time. “The first sailing had been delayed three hours already, and even if we had started the service it would have meant all sailings would have been delayed four hours. We felt it was in the best interest of everyone to cancel the sailings for the day, as there would have been an extremely late delay in sailings and by cancelling the sailings as early as we did it provided customers sufficient time to make alternative arrangements. It was disappointing to everyone, but at least it didn’t occur on Monday (Labour Day).”

Ms. Schrempf reflected on the fact that “considering the pandemic this year, the ferry service has been running very smoothly all summer, we hadn’t had any mechanical or weather problems that caused cancellations this season.”

“The good news is that even being required to carry a lower number of passengers on board the ship (due to the pandemic), as of the end of September 7 on the car deck we have carried 50 percent of last year’s traffic (including passenger numbers from May 2019),” said Ms. Schrempf. “We weren’t operating the ship in May this year and when the sailings were started we were restricted on the number of passengers we could have on board; if not for the restriction on the number of passengers (due to COVID-19) the ferry would be showing fantastic numbers this season. We have been maxing out on our passenger numbers, with traffic having picked up at the end of July and August.”