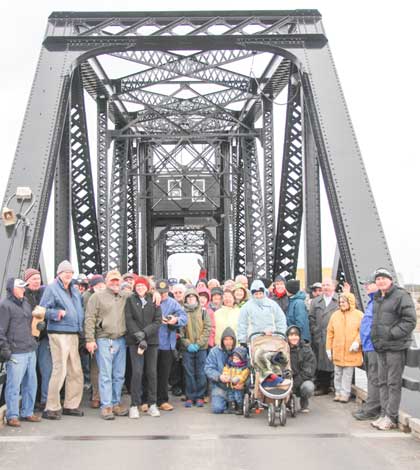 LITTLE CURRENT—A group of almost 75 hearty souls gathered at the Little Current end of the Manitoulin swing bridge at 9 am on a cold and blustery Monday morning, November 18, to mark the occasion of the 100th anniversary (exact date and time) of the first swing of the historic bridge.

Huddled in their cars against the gusts of cold wind—the same wind that had brought an Island-wide power outage in the wee hours of that morning—until that exact moment, a steady stream of people lined Highway 6, eager to mark the old girl’s birthday on this day of no power. While the bridge is still equipped to swing, power or no power, it was not to be. Bridgemaster Louie Gordon admitted to having never swung the bridge on a day with winds as wicked as Monday’s, and was not going to risk it. Once the bridge is unlatched, he explained, there was no telling whether he could return it back to its perch. He did, however, lower the barricades and close down the bridge to traffic at 9 am so everyone wanting to be a part of the moment could “get close” to the bridge.

Undaunted, the well wishers walked on the bridge, posed amid howling winds for a photo and even sang a rousing rendition of the Happy Birthday Song. Then it was off to 3 Cows and a Cone for a slice of birthday cake. The day was probably not unlike the one 100 years ago, complete with no electricity on Manitoulin. The first bridge swing was done by hand.

Katherine Pinch, 91, of Little Current, was the oldest resident there to mark the occasion. Her brother, the late Austin Bateman, worked on the bridge for many years, she shared. The youngest celebrant was 14-month-old Indiana Desaulniers from Gore Bay. Ben Armstrong, 13, of Little Current attended the celebration, put on by The Expositor, with his grandmother Maureen. He explained that he wanted to come, the importance of being present for the anniversary not lost on him or his grandma.

Expositor publisher Julia McCutcheon handed out 100th anniversary bridge pins care of the Northeast Town, while bridge history book author Bill Caesar had decorated 3 Cows and a Cone’s walls with a pictorial display of the history of the bridge for those wishing to learn a little more.

As in 1913, Little Current’s church bells pealed at 9 am to mark the occasion. Ivan Edwards was the official bell ringer at the Little Current United Church while Joanne Wade fulfilled a lifelong dream and joyously rang the bells across the street at her church, Holy Trinity Anglican. (St. Bernard’s Catholic Church participated in the bell ringing in spirit as their new system demands electricity for the clapper to hit the bell).