TORONTO—The Canadian National Institute for the Blind (CNIB)’s Eye Van has been touring around Northern Ontario for 45 seasons, offering vision services in communities that do not have the same resources available. For its 46th season next year, it will tour around in style with a brand new truck and clinic trailer.

“A lot of the equipment in here is getting old. It’s still working, but we could use newer tools,” said Layla Sykes, a nurse on the 2018 run.

The current 48-foot transport trailer is approximately 15 years old and has a few different tiered levels inside. Ms. Sykes said accessibility was a major concern when designing the new mobile clinic.

“We are going to have a newer lift to accommodate larger wheelchairs. There will be no stairs inside,” said Ms. Sykes.

The new clinic was designed to be better-suited to both patients and employees. That was helped by the additional five feet of length on the new 53-foot trailer.

“It’s going to be setup with more of a focus on patient privacy in terms of patient assessments,” said Ms. Sykes. “It’s also going to be easier for employees to use and manage.”

Staff on the Eye Van work for CNIB and take on year-long contracts to work within the mobile clinic as it travels across Ontario. The 2018 team consisted of nurse Craig Robinson, Ms. Sykes and program assistant Jim Ainsworth.

“The mandate of our program is to prevent vision loss. We work closely with diabetes educators; we have lots of diabetic patients,” said Ms. Sykes. This year’s campaign began on April 2 and ended its run in Little Current on November 2. It visits 30 communities across Northern Ontario every year.

The Eye Van works on a referral basis. Physicians, nurses and diabetes educators can refer their patients to the clinic if they have a condition that needs to be addressed. Patients from previous years are often called back for follow-ups to see how their conditions have been progressing.

On this final leg of the journey, the Eye Van had ophthalmologist Dr. Ziad Butty from Toronto on board. He specializes in glaucoma. Ms. Sykes said doctors often return for years to participate in the Eye Van program. It also sometimes attracts medical students and recent graduates.

“People think we do eye exams. But it’s a lot more than that. We manage disease, often in diabetes patients, including glaucoma, macular degeneration; it could even be from an eye infection to a laceration from an injury,” said Ms. Sykes.

After her first year on the road, Ms. Sykes said she enjoyed travelling across the province. Her two colleagues were also spending their first year with the Eye Van.

The Eye Van’s new truck and trailer will be unveiled at an ophthalmic convention in Toronto on November 30. 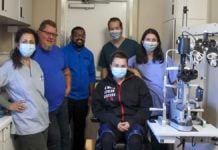 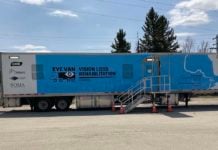