WIKWEMIKONG—Wikwemikong High School students are continuing their learning journey of the music industry through the school’s music business course in conjunction with Coalition Music—a management company from Toronto with famous clients such as Simple Plan and Our Lady Peace—with a recent visit, including a workshop and school-wide performance from Toronto duo Ubiquitous Synergy Seeker (USS).

During their visit Mr. Kelly, the lead educator for the day, led a panel discussion with USS, Mr. Meikle and Mr. Killeen for the music business class. Topics focussed on song structure and song writing.

Following the panel discussion, the students were split into two groups, working with Mr. Kelly or USS and Mr. Killeen, pitching songs they had been working on with their group leaders and who assisted them in improving their song’s structure, lyrics and instrumentation. The group’s leaders then switched, continuing with an added perspective to the song’s development.

In the afternoon the Coalition Music team worked with the students, preparing for the upcoming Rezfest event on Friday, May 30 at the Wikwemikong Arena.

“Rezfest is a concert experience that’s put on by the students,” explained Mr. Kelly. “They’re organizing all aspects of the concert—putting it together, organizing production, performing, delivering and promoting the show. It’s an all encompassing practical application of what we’re working on with them in the music business course.”

The day concluded with a performance for the entire high school from USS, with a surprise highlight of the band performing one of the songs the students had written and worked on earlier in the day.

“One of the students had a very strong song idea and she shared it with us,” Ashley Buchholz explained of USS’ decision to sing one of the student’s songs. “She was remarkably open minded and accepting of our perspective—we really worked together. It was a beautiful thing. The aim of our performance of her song was one of mutual respect. We wanted for the students to see that we [artists] aren’t some kind of mythological kind of creature and that everybody can do it. So often, young people either watch music on YouTube or in concert arenas.”

“If we had access to a course like music business when we were in high school, it would have helped us make fewer mistakes: it would’ve been great if we had realized how much assistance there is for young Canadian artists where, for example, you can learn about legal aspects of the industry, about financial information, or about recording and marketing support for aspiring musicians and emerging artists,” add bandmate Jay Parsons. “We were really flying by the seat of our pants when USS started out—if we had had a guiding force at a younger age, we would have been smarter as we moved through the obstacles of the industry. We could have taken more calculated risks without jeopardizing our future as a band.”

The music business course was launched last year at Wikwemikong High School and focusses on teaching students how to compose and write music, record, advertise and market themselves as an artist.

Wikwemikong High School is not only the first school outside of Toronto to run the program, but also the first aboriginal school to offer the course.

“The music business (program) is a Grade 12 inter-disciplinary high school credit course that is offered by Coalition Music,” Ms. Harrison previously explained to The Expositor. “Through the music business course, Coalition Music addresses a great void that exists between the talented young musician and their ability to actually build a career as an artists or music industry professional.”

The program is made possible thanks for funding from Rogers Media.

Later this month the Wikwemikong music business students will be visiting the Coalition Music studios in Toronto to go through some performances and recording workshops in preparation for their Rezfest event in May. In June, they will return to the studio to record the songs they’ve written throughout their semester alongside professional producers and recording engineers. 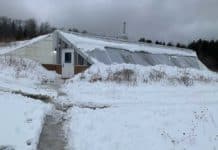 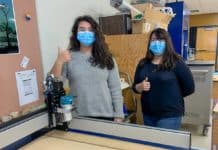 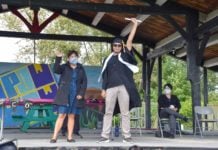 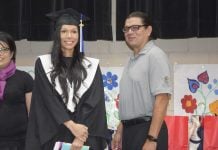