The Canadian Coast Guard, in partnership with the United States Coast Guard and the Ontario Provincial Police, warned today of potentially unsafe ice conditions in the vicinity of icebreaking operations and shipping routes in the Great Lakes. Icebreaking operations to assist commercial shipping are currently underway in various areas of the Great Lakes. The following Ontario harbours will see icebreaking activity in the near future:

Icebreaking operations may begin as early as April 4, 2015 at Owen Sound, at Midland and at Whitefish River/Fisher Harbour on or about April 5 and 6, 2015.

Dates and routes are subject to change with little or no notice, due to weather, ice conditions, shipping schedules or other unexpected situations.

Ice users should be aware that there might be ship movements or trials in the vicinity prior to these dates.

Broken and fragmented icy tracks left behind by icebreaking operations and other ship traffic may not freeze over immediately. Newly fallen snow may obscure icebreaker and ship tracks and changes in weather contribute to unsafe ice conditions that may remain long after the ships have left the area. All ice on or near the planned shipping routes and icebreaking operations should be considered unsafe during and after ship transits through these routes. The Canadian Coast Guard (CCG), the United States Coast Guard (USCG) and Ontario Provincial Police (OPP) are advising everyone to stay clear of these areas. 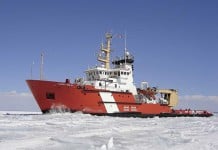 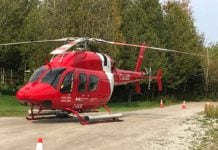 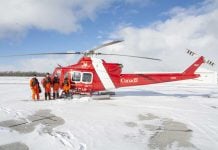 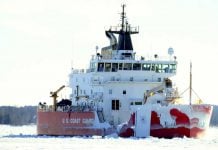 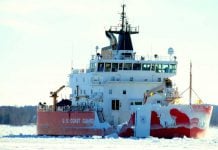