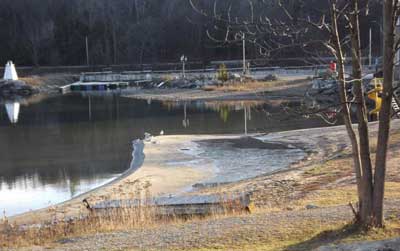 MILWAUKEE—Manitoulin Island representatives have panned comments made by experts at the annual meeting of the Great Lakes Commission (GLC) that climate will have the biggest effect on Great Lakes water levels, and one local representative says that instead of debating what method should be used to curtail the reduction in water levels, the key is to have action taken by the Canadian and US governments to resolve this issue.

“I would use the term male bovine intestinal discharge because there appears to have been an overabundance of this at this meeting,” stated Mike Wilton of Spring Bay. His comments were in regards to experts saying at the Monday meeting that placing water retention structures in the St. Clair River may not be enough to counteract the effects of a warming climate and raise Lake Huron and Michigan to their normal levels.

As water surface temperatures and evaporation rates continue to rise, low water is likely to be a long-term problem despite significant improvement this year following heavy snows in winter and a rainy spring, according to information provided during the meeting. The Associated Press (AP) reported Scudder MacKey, coastal management chief with the Ohio department of natural resources, as saying water levels go up and down, and that it’s a natural process, something that we have to learn to live with.

“Those throwing a red herring at everything, saying global warming has affected Lake Huron for the past 12 years is b.s.,” said Mr. Wilton. “The levels have been going down since the late 1990s. These people need to get with it, and I still maintain Chicago has something to do with the decreasing levels, but that what has been done at the St. Clair River with dredging and the like has been the majority of the cause. But for anyone to throw their hands in the air and say ‘do nothing’ is crazy.”

Jim Nies, a member of the Manitoulin Area Stewardship Council (MASC) who attended the meeting, told the Recorder on Tuesday, “there was a discussion and question and answer session on the issue. Mr. Scudder was presenting the whole case for climate change and said doing something in the St. Clair River won’t really matter to the levels. And another other group from Chicago was saying how they don’t want higher water levels.”

The water levels have been mostly below normal on all five Great Lakes since the late 1990s, but the drop off has been most severe on Lakes Huron and Michigan. Huron-Michigan has risen 20 inches since January, which exceeds its usual seasonal rise, Keith Kompoltowicz, a meteorologist with the Detroit office of the US Army Corps of Engineers, was quoted by AP as saying. However, it was pointed out the levels are still 17 inches below their long-term average. Lake Superior is also slightly below its long-term average, while Lakes Erie and Ontario have exceeded their levels.

This past spring, the International Joint Commission (IJC), which advises the US and Canada about the Great Lakes and other shared water resources, had recommended a study of installing structures resembling underwater speed bumps in the St. Clair that could raise Huron and Michigan by five to 10 inches. However, neither federal government has acted on the proposal. Groups such as MASC and Restore Our Water International (ROWI) say that climate isn’t the only reason water is extraordinarily low. They look to things like dredging, gravel mining and other activities that eroded the floor of the St. Clair River on Huron’s southern end, accelerating the flow toward Lake Erie.

Mr. Mackey was reported as saying lows on Lakes Michigan and Huron may remain if there is increased evaporation and less precipitation, even if compensating structures were installed.

Deborah Lee, regional business director for the Army Corps, was quoted by the AP as saying it would take up to 25 years to plan, design and build the structures and another decade for them to boost levels as much as hoped. And over that time, they could rise or fall on their own. She said they cannot predict what the effects of climate will be with the accuracy to make these kinds of decisions.

“To say it will take 25 years to put up the structures is crazy,” said Mr. Wilton. “As Roger Gauthier said, sensibly it would take three years.”

Roger Gauthier, chairman of ROWI, a group in favour of regulating the lake levels, said structures could be installed much faster than Ms. Lee estimated, and once installed they could boost Huron-Michigan levels by about 60 percent within three years. He said governments need to be able to act in a time frame that treats this like a crisis, adding that everyone would benefit from stable and reliable water levels.

“Mr. Gauthier, I thought, did a really good job in providing information, noting that the structures can be done affordably and in good time and be adjusted so the levels can be raised or lowered as needed so no one would be adversely affected,” said Mr. Nies. “He did a good job in his presentation, but he was also outnumbered. The Great Lakes Commission is a tabling of all government people and officials—it provides a way to present information, but they don’t make any recommendations they have no real power.”

“Personally, I think the work Colin Dobel and the Stop the Drop group have done is really doing a great job,” said Mr. Nies. “In my opinion, what Mr. Dobel and his group is advocating is the best; they are advocating for a solution of any kind and to have this communicated to elected officials, indicating they are being watched and that they want to see action taken by governments, whatever is the best option. The Stop the Drop approach is to avoid battles on what type of options should be looked at and just get something done on the issue.”

“Based on the newspaper reports of the meeting, Mr. Gauthier was the most sensible one who spoke at the meeting. I think most of these people that are throwing red herrings out there are just trying to evade the issue,” added Mr. Wilton.