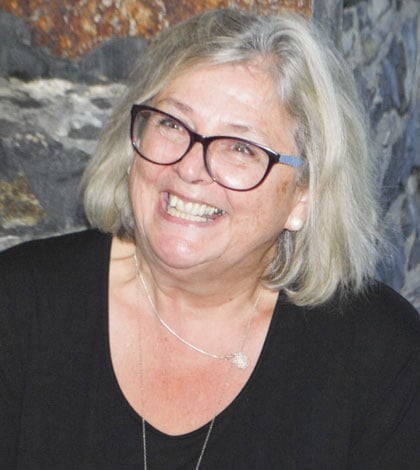 SUDBURY—Some 15 Island friends and admirers of Manitoulin textile artist Judy Martin were part of the large throng that attended last Saturday’s opening of her solo show at the Art Gallery of Sudbury (AGS).

The display of her work is titled ‘Mended World’ and the spacious downstairs studio of the AGS is given over to the display of four large pieces of work, essentially tapestries, that the artist created as a community project on Manitoulin over a span of four years.

The 15 Island people in attendance were some of the over 140 people (largely women) who had a part in the works’ creation between 2009 and 2013 and Ms. Martin gathered them around her during her artist’s talk.

Ms. Martin made use of the large assembly hall at the Little Current United Church to which anyone interested in sewing the four pieces was invited virtually every Thursday for four years.

The pieces have their individual themes as a part of the whole and are titled ‘Layers of Time,’ ‘Earth Ark,’ ‘Mended World’ and ‘Precious Water.’

The upstairs studio of the AGS was devoted to a fabric journal Ms. Martin had maintained through the four-year period. The artist daily stitched an entire skein of cotton embroidery thread using the couching technique onto a ‘day’s worth’ of an enormously long canvas backing, about 12” wide that stretches, in one piece, nearly 60 feet. That represents three years. A smaller piece, similarly draped in a sine wave pattern upstairs is easily 20 feet in length and represents one year of the four.

The colours of the embroidery thread Ms. Martin used each day in this unique journal were chosen blindly.

The large and softly muted installations are, appropriately, set off by the sketches the artist created as the basis for the large panels on display in the main studio below.

The work over the four-year period represented an artistic residency hosted by the Little Current United Church community and Ms. Martin thanked the church which, she said, would be the ultimate repository for the tapestries once they had completed their tour, making specific reference to recently retired Rev. Faye Stevens who had shared her initial vision for a community project.

Ms. Martin also acknowledged “this beautiful gallery which I think of as my gallery. I’m a regional artist and I’ve always dreamed of having a show here.”

Time, Ms. Martin noted in her artist’s talk, is a theme that has captured her imagination. “How do we capture it?” she questioned, promptly answering the question by pointing out that virtually every piece of fabric in each of the four 5.5 foot by 6 foot (approximately) pieces has been someone’s clothing or part of a woolen blanket used for warmth, or a damask tablecloth from many years ago.

Her goal was to “make a public artwork with community appeal. If everyone came together one day a week to stitch, then we would accomplish this.”

And come together they did, signing in each week in a participation journal that eventually required a second volume. Another nod to community participation were two volumes in which one hand of each participant had been traced and then highlighted by the artist, their names rendered on their page.

These people captured time, in the example of the first piece, ‘Earth Ark,’ by embroidering, (sometimes learning the technique) French knots, a classic embroidery stitch, onto new silk derived from women’s hankies.

Ms. Martin explained that her stitchers were derived from a core group of about 30 who were regulars and then another 100-plus who come when they could. For herself, she said that, “I worked on it nearly every day,” another practical vision of time and the four-year time span Ms. Martin had considered for the project’s completion.

For herself, Ms. Martin read from her own diary a year into the project how the process had made her more than ever feel a part of the community where she and her family have lived for more than 20 years.

On September 12, 2012, at the beginning of the year that would finish the stitching cycle, Ms. Martin recalled what she had said to her stitching friends: “the most important thing is that we are here week after week. Our hands join us. We are nourished as we see something grow from an idea to something we can feel and touch. We come together. We heal.”

Stella Strong from White’s Point, one of the cadre of regular stitchers, told Ms. Martin on behalf of all who had worked on the project that “it’s you who we must thank” to much applause.

A question-and-answer time followed the artist’s talk with Ms. Martin explaining more of her motivation and techniques.

The show runs at the AGS until Sunday, March 2. The gallery is open Tuesdays to Saturdays, 10 am to 5 pm, and Sundays from noon to 5 pm.

The AGS is located at 251 John Street in Sudbury (off Paris Street just past the old St. Joseph’s Hospital site). The phone number for enquiries at 705-675-4871.