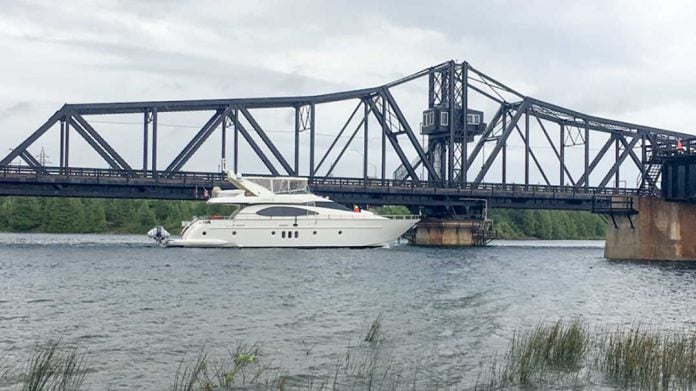 LITTLE CURRENT – Engineers and consultants working on the future plans for the Little Current crossing of Highway 6 across the North Channel have narrowed down the feasible crossings to five potential solutions. A description of each of the options follows below.

A bascule bridge, one that has two sides which angle up and out of the way of tall marine traffic like a drawbridge, would maintain the current navigational clearance of 48 metres. However, it would have only one navigation channel rather than the existing two.

Bascule bridges are more reliable than swing bridges due to having smaller moving spans and smaller mechanical equipment. However, movable bridges are not common in Ontario and would require specialized building techniques.

The operation and maintenance costs would be higher than a fixed crossing, though there would be minimal impacts to existing views and the current road alignment. Its movable nature would also carry a certain degree of uniqueness. But, the bridge could still break down and require closures. Boat traffic could also be disrupted during construction. The estimated cost for a bascule bridge is $130 million.

The new bridge could possibly also be a swing bridge much like the existing structure, just installed either immediately to the east or west of the current alignment. However, it would offer two separate navigation channels in contrast to the two other movable bridge designs. As a movable bridge, it shares many of the same strengths and weaknesses as the bascule bridge but can experience alignment problems as the pivot machinery wears over time.

Reliability, construction considerations and operating and maintenance costs are similar to the bascule bridge, and it may also disrupt boat traffic during construction. However, creating a new swing bridge would speak to the heritage aspect of the outgoing structure.

The estimated cost for a new swing bridge is $140 million.

This bridge option shares nearly identical strengths and weaknesses with the bascule bridge, with the only difference being that there would be a maximum height restriction for vessels due to the nature of the bridge deck raising vertically from the road level.

It would also have moderate impacts to the existing viewscape, versus minimal with the other movable bridges, mainly due to the high columns needed to carry the bridge deck skyward. It would be able to provide 36 metres (118 feet) of clearance underneath the raised span.

The estimated cost for a lift bridge is $130 million.

A fixed bridge would require steeper road grade approaches (approximately five percent) as opposed to a movable bridge and also offer the limited boat clearance of 36 metres. However, it would open the channel far wider (55 metres) than any of the movable bridge options, which only offer 48 metres of channel width.

It would create multiple navigation channels below, but may be susceptible to high winds at the high bridge level, leading to possible temporary closures—especially in winter weather. However, a fixed bridge is much more reliable than a movable bridge which relies on mechanical components.

Fixed bridges are quite common in Ontario and construction techniques are widespread and standardized. There would be no operating costs and the maintenance costs, such as snow plowing, are similar to other Ontario bridges. A large structure such as this, though, would have considerable impacts to the natural landscape and would impact properties where it touches down on the Island side. The road would also meet up with the existing alignment closer to the intersection of Meredith St. and Manitowaning Rd in Little Current, meaning the Manitoulin Island welcome centre and businesses along that stretch of road would be away from the main flow of traffic. A stub-ended feeder road would have to be constructed to access these properties.

The estimated cost for a fixed bridge is $150 million.

A tunnel under the North Channel would require even steeper road grade approaches (more than seven percent) than a fixed bridge, but it would provide for unlimited vertical and horizontal clearance for boat traffic. It is also much more reliable than a movable bridge because it has no mechanical components, just like the fixed bridge.

The roadway underground would be protected from winter weather, winds and other environmental factors, but it would not offer a comfortable environment for pedestrians and cyclists. If the ventilation or electrical systems in the tunnel were to malfunction, it could require a temporary closure of the roadway. Tunnels are also uncommon in Ontario and require highly specialized construction techniques. The risks during construction are also significantly higher than the bridges. The ventilation and electrical systems come with operating costs.

There are far lower maintenance costs for snow plowing compared to the bridges and a tunnel would not impact the view at the site of the current swing bridge. There would be no impacts on boat access during the construction phase, unlike all the bridge options, due to the underground boring process.

The estimated cost for a tunnel is $500 million, significantly more than all the bridge options.