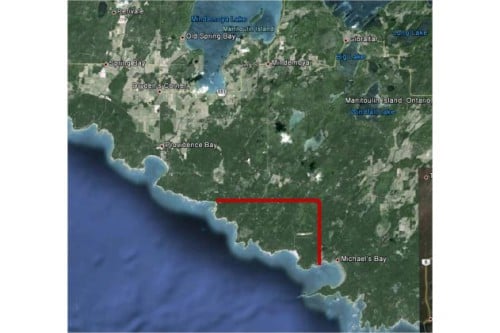 CENTRAL MANITOULIN—Carter Bay property owner Bill Cranston presented a short delegation to Central Manitoulin council at its Thursday, September 28 meeting, but in the end council decided to pass a motion to inform those property owners who are not in compliance with the municipal bylaw on development on the steps they must take to be in compliance (essentially removing the offending structure).

The text of the motion reads: “That council direct staff to issue notices to, and otherwise communicate with, all property owners in the Carter Bay Development area, who are not in compliance with the current zoning bylaw, notifying them of the necessary measures they need to undertake to be in compliance with same.”

Mr. Cranston noted that there are a number of people who pay taxes on the property but that they are prevented from any development. “It is land that is owned, but they can’t do anything with it. As it stands with the town’s bylaws, you can’t even leave a trailer on your property.”

“This issue was to go before the (Manitoulin) Planning Board (MPB),” noted Councillor Derek Stephens. “I was wondering what may have been the discussion? I do know that the dynamics of Carter Bay have changed. I question whether people have a hope of applying for a zoning change, to take it out of planned development designation.”

Mayor Stephens, who is the municipality’s representative on the MPB, said that the matter did not come up for discussion at the last MPB meeting. “There wasn’t any specific discussion,” he said, noting that there had been a recent public meeting where the council had heard from a number of the property owners, including one who had ended the checker-boarded nature of the lots in the development.

The current owner purchased the many lots that made up the Carter Bay Development, properties that had been held under two different companies to “checkerboard” the adjacent lots so they would remain separate, rather than being amalgamated into a single property.

Mayor Stephens said that he had “gone back to the September 21 motion” where staff was “directed to consult with the relevant authorities on Carter Bay so we can be better informed and some of your questions can be answered.”

Councillor Alex Baran cited “our 89-page municipal bylaw that includes everything you could ever want to know about zoning” that outlines the site specific policy area in question, noting that an amendment to the Manitoulin Official Plan was required. That application can be undertaken either by the property owner or the municipality.

Councillor Baran noted that an application to the MPB would trigger consultation with all of the relevant ministries, thus saving a lot of research effort on the part of municipal staff.

“Nobody on staff has the expertise,” agreed Ms. Frawley.

After some debate on the procedural implications of passing a motion to enforce compliance (and what impact that would have on the previous motion to rescind the compliance letter sent to Mr. Cranston), it was determined that the new motion would supersede that motion. “The later motion would prevail,” said Ms. Frawley.

Mayor Stephens interjected “was it not within the 100 square-foot limit (where a permit is not required)?”

“No it was not,” supplied Councillor Stephens.

“It was my understanding that it was,” responded Mayor Stephens.

In the end the motion ordering compliance was passed, but with the caveat expressed that, due to the lateness of the season, there would be some leeway in the timeframe for compliance.