CENTRAL MANITOULIN—A motion to support “in principle” the creation of a farmers’ market in Providence Bay received strong support from council during its Thursday, March 28 meeting. The “in principle” designation of the motion, moved by Councillor Linda Farquhar and seconded by Councillor Al Tribinevicius, was left in place as a number of members of council felt they needed more information about what the new market would need from the municipality to go forward.

“Prior to this meeting I have been speaking to Mr. (Ted) Smith,” said Councillor Angela Johnston. “I had sent a message to the Community Centre Board. Mr. Smith’s feeling is that they would like to have the market on the grassy area by the Interpretive Centre.”

“That’s between the centre and the arena,” clarified Councillor Derek Stephens.

“I am not sure the curling club would have been a good fit,” continued Councillor Johnston. She noted that the original motion called for Mr. Smith to speak with the Providence Bay Curling Club and the Providence Bay Community Centre Board assistance that he may require, but that the new proposed venue would make that consultation unnecessary.

“It did seem to be a good idea to have them (the Community Centre Board) asked if they want to be involved,” said Mayor Richard Stephens.

“What does ‘support in principle’ mean?” asked Councillor Johnston. “Is that a ‘yes go ahead’ or ‘we need more information’?”

“Depending on when he wants to start, doesn’t the Interpretive Centre give classes?” asked Councillor Stephens. “I suggest it (the grass section mentioned by Councillor Johnston) might be a better location. I think we do need to keep the Community Centre Board informed as they have events too.”

“There is also the question of do they need the municipality’s hydro,” noted CAO Ruth Frawley.

“So that is the basis of ‘support in principle’,” said Mayor Stephens, “(we) need to tie up some loose ends. Especially since we are losing the one we have in Mindemoya.” (The Mindemoya Market, held Saturday morning in the summer months, will be moving to the M’Chigeeng arena.)

“Providence Bay has a lot going for it,” said Councillor Stephens. “I think it will be a good thing to have in Providence Bay. I think we have to support them.” 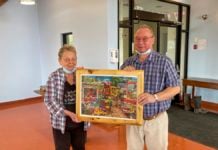