MINDEMOYA—The Arts and Entertainment (A&E) network has hosted the reality show Storage Wars for five years now with contestants vying for the contents of storage lockers that owners have not paid the rent on when due. The buyers are allowed a few minutes to look inside each locker after the lock has been cut off and the door on the unit opened. A professional auctioneer then starts the bidding for the contents of each locker. The series is so popular that it is now seen in over 18 countries and includes Storage Wars Canada. 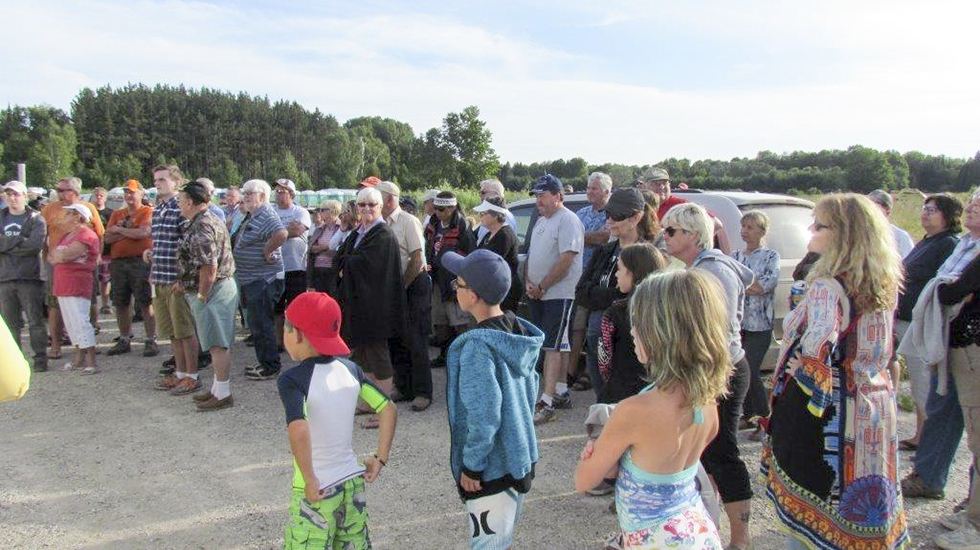 On July 16, Mindemoya had its own version of storage wars as businessman Wayne Legge arranged to have the contents of four of the 42 storage units owned by him auctioned off as the rent owing had not been paid.

Norm Morrell was hired to run the auction and the affable auctioneer did an awesome job, outdoing Dan and Laura Dotson of the A&E show. Mr. Morrell, who hails from Evansville, has been auctioneering for 37 years and, at one time, was the principal of Mindemoya’s public school. With a great deal of humour, he pointed out that the large crowd included people from West Virginia, Louisiana and Florida and explained the rules of the auction including the fact that people can only have a brief look inside the locker before the bids are taken. He also introduced his ‘sidekick,’ Carol Gilmore, who has been serving as clerk at Island auctions for 36 years. Ms. Gilmore keeps track of the bids and, at larger auctions, writes down the numbers of the winning bids. She explained that as this auction only pertained to four storage units, it would not be necessary for the people bidding to be handed numbers. “You only have to know your name and how to spell it,” Mr. Morrell said to much laughter.

After checking with Mr. Legge, Mr. Morrell told the sizeable audience that the people with the winning bids were able to pay by cash or cheque. “And if your cheque bounces,” he added, “we will be sending a guy named Louie to see you.”

The storage units were a treasure trove of goods for the lucky bidder. Items included furniture, a generator, motor, vinyl records, extension cords, Christmas decorations, pillows, a microwave, coolers and a tent. With winning bids ranging from $140 to $850 for the fourth locker that was full of large covered bins, the auction participants realized an excellent evening.