LITTLE CURRENT—A fitting venue for the annual 2013 Waubetek Business Awards Gala, the new Manitoulin Hotel and Conference Centre played host to a full crowd there to honour the achievements and hard work of First Nation businesses in Northeastern Ontario.

The Manitoulin Hotel and Conference Centre is the brainchild of the Great Spirit Circle Trail, itself the protege of the Waubetek Business Development Corporation, and is owned by member communities Wikwemikong Unceded Indian Reserve, Sagamok Anishnawbek, Whitefish River, Sheshegwaning, M’Chigeeng, and Aundeck Omni Kaning First Nations.

Co-masters of ceremonies, husband and wife duo Mariette and Greg ‘The Goose’ Sutherland, had the crowd in the palms of their hands, as Ms. Sutherland’s sweet demeanor and Mr. Sutherland’s antics kept the full house well entertained leading up to the main event—the awards ceremony.

Following opening remarks by Aundeck Omni Kaning Chief Patsy Corbiere, who congratulated all of the winners, Waubetek chair Martin Bayer spoke next. Mr. Bayer said he was proud and honoured to serve as Waubetek’s chair.

“It’s always exciting and fun to be part of an organization like Waubetek,” he said, noting the importance of celebrating “the determination and successes of the people we work with.”

Mr. Bayer said the First Nations businesses Waubetek has supported over the years have demonstrated that it’s possible to move past the financial challenges faced by many Anishinaabe people. He noted that Aaron and Curtis Corbiere, who would be honoured later in the evening, have also faced their fare share of “bumps in the road,” but they persevered with the business that their parents, the late Eric and Vicki Corbiere, began.

“I’m proud to support people like that, who work long hours,” he continued. “This shows we can move past the barriers we face. To our Nishinaabe people, I want to say how proud we are of you. You serve as a role model for our young people in our community—this is really important.”

“In our community, the largest employer is the band, which is important, but employment is made easier if we continue to encourage small business in the community,” Mr. Bayer added. “Unlike mainstream society, our unemployment rate is 20 to 30 percent, but our populations are really growing and yet the funding levels haven’t kept pace with that.”

“Chi-miigwetch for taking that risk and creating those jobs,” he added. “For reversing our dependency and attaining sustainability.”

Mr. Bayer explained that most government funds going on reserve go to social programming, with only four percent set aside for economic development.

The chair shared the staggering number of $55 million, which Waubetek has given out in loans as a Community Futures agency, to over 2,000 businesses since its inception in 1990 with a 94 percent business success rate.

Mr. Bayer concluded by thanking the Waubetek staff for their hard work, as well as FedNor and Aboriginal Development Canada.

Waubetek general manager Dawn Madahbee took to the stage next, noting her pride in seeing how big the Waubetek alumni has become.

“In the beginning, during our first year we had $150,000 to loan out,” she explained. “Now we have $55 million invested throughout Northeast Ontario today.”

Ms. Madahbee acknowledged Union of Ontario Indians Grand Council Chief Patrick Madahbee, who has attended each of the awards galas, the chiefs from across the region who were also in attendance as well as Carmen Demarco of FedNor, who has been with Waubetek every step of the way.

Kevin Mossip, also of the Waubetek board, then introduced the first award winners of the night, Aaron and Curtis Corbiere, named as Youth Entrepreneurs of the Year.

The audience was treated to a short video about the Corbieres, of the M’Chigeeng First Nation, which included clips of them hard at work at their respective businesses. Curtis Corbiere, the youngest brother at age 23, runs CC Construction while brother Aaron Corbiere, 28, is the head of ACT Landscaping and Construction. Both businesses fall under the umbrella of the business their father began, E. Corbiere and Sons Contracting.

In the video, Curtis noted how it was hard to get a loan, as “rez houses aren’t worth anything” to a bank, and “all you’ve got is your truck.”

“It took a lot of hard work and determination to get it all started—lots of hours and no pay,” Curtis added.

“We wouldn’t be here if it weren’t for our dad,” Aaron added, thanking Ms. Madahbee and Waubetek.

Curtis said he hopes to see E. Corbiere and Sons enter into the water and sewer business, as these jobs aren’t often given to First Nation contractors.

The young men got their good work ethic from their father Eric, whom they had the chance to work with for almost a decade before he passed away unexpectedly.

Between the two of them, the brothers are responsible for several excavators, a crusher, float trucks, seven dump trucks, a trailer dump, loaders, bulldozers and a roller pack. These, inevitably, break down and it is this, the brothers’ say, that causes them a lot of headaches as business owners.

CC Construction has secured contracts from Parry Sound to White River, while ACT Landscaping and Construction is busy with its crews building rock retaining walls, fixing driveways, draining and ditching, as well as planting trees and garden beds, with contracts as far reaching as Magnetawan and Sault Ste. Marie.

Aaron notes that he was born into construction, remembering fondly watching his father run the heavy machinery, as he, as a child, was eager to get behind the gears. “I just always loved it since I was a little kid,” he is quoted as saying in the Waubetek newsletter. “I just wanted to run the machines. I loved it and still love it, especially running an excavator.”

“I’m sure their father is looking down on them now,” Ms. Sutherland said following the video presentation. “Our people are inspired and educated. We all have a part to play in getting our young people to that stage.”

“This is not the end of their story—we will continue to see lots from them,” she added.

“A big thank you to everyone who made this possible,” Curtis said. “Dawn and everyone at Waubetek. We’re looking forward to doing a lot of work on reserves.”

“What he said,” Aaron added with a laugh.

“They’re men of action, not of words,” Ms. Sutherland said.

Derek Debassige, owner/operator of Manitoulin Physio, also in M’Chigeeng, is a past recipient of the Young Entrepreneur of the Year award and was at the awards ceremony.

“It’s great to see Aaron and Curtis receiving recognition for their successes,” Mr. Debassige told The Expositor. “Young entrepreneurs are an integral component of our communities’ development. These are two talented and hard working young men that have been through a lot in the last few years. Their initiative has created jobs and opportunities in M’Chigeeng and they have made their parents, families and community proud. Great work and congratulations to them both.”

Following the awards the recipients gathered around the High Eagle drum for an honour song that reverberated throughout the room.

The crowd was then entertained by first class aboriginal entertainment, beginning with 17-year-old Nathalie Restoule of the Dokis First Nation with her soulful voice. The young woman is signed to Crystal Shawanda’s label New Sun Records. Jason Manitowabi and Band of Wikwemikong and Brock Stonefish of the Moravian Delaware Nation topped the evening with their musical offerings. 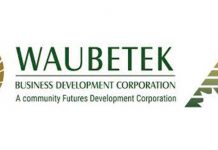 Waubetek recognized by the Greater Sudbury Chamber of Commerce 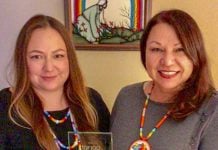 Dawn Madahbee Leach named one of Canada’s most powerful women 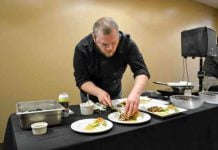